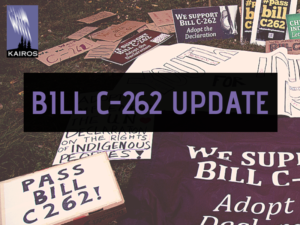 Although originally scheduled to adjourn on June 28, the Senate is now expected to wrap up today, National Indigenous Peoples Day, leaving several bills, including Bill C-262, in limbo.

In an Open Letter dated June 17, Indigenous peoples’ organizations and other human rights groups, including KAIROS, urge the federal government to do everything in its power to ensure that Bill C-262 does not die on the Order Paper.

If enacted, Bill C-262, an Act to ensure that the laws of Canada are in harmony with the UN Declaration on the Rights of Indigenous Peoples, would establish a legislative framework for implementation of the Declaration. It would require the federal government to work in consultation and cooperation with First Nations, Inuit and Métis peoples to develop a national action plan for implementation as urged in the Truth and Reconciliation Commission of Canada’s Calls to Action.

This recent development does not mean the bill has reached the end of the road.  The bill is not officially dead until the writ drops for the federal election, and there may be opportunities for it to pass before then. If not, we will continue to educate and advocate and build on the extraordinary awareness and support for this Act – thanks to you – in the next Parliamentary session.

Look for updates and possible actions next week.