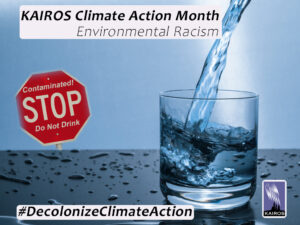 Re. Bill C-226, An Act Respecting the Development of a National Strategy to Assess, Prevent and Address Environmental Racism and To Advance Environmental Justice

For the third time, a Member of Parliament has tabled a bill to address environmental racism and advance environmental justice. KAIROS encourages its supporters to help get this bill passed. The bill is the result of decades of advocacy by racialized environmental activists and allies in Canada such as the Black Environmental Initiative and the Canadian Coalition for Environmental and Climate Justice. Black, Brown and Indigenous activists are leading this work and bring crucial perspectives to environmental issues.

In February 2022, Elizabeth May (MP for Saanich-Gulf Islands) tabled Bill C-226, which passed second reading in June. The Minister of Environment and Climate Change stated in the House of Commons that the government supports this bill. Ms. May provides details and background information on the bill, including examples of environmental racism on her webpage.

Environmental racism refers to environmental harms that are disproportionally distributed along racial lines.  As described by Aline Coutinho and Harshini Ramesh for the Smart Prosperity Institute, “Black and other racialized communities are disproportionately vulnerable to environmental pollution and climate change… due to socioeconomic and political structures that decrease their capacity to build resilience against environmental hazards and to participate in decision-making that affect the exposure levels to pollutants of their communities.”

Environmental racism operates in Canada and globally, directly harming racialized communities. Wealthy countries have used and are still using communities in the Global South as dumping grounds for toxic substances, electronic wastes, and polluting industries, as well as allowing corporations to commit human rights abuses as they extract resources. Canadian companies have participated in these abuses of human rights and environmental health locally and internationally. Environmental racism is made possible by the racist ideology of sacrifice zones. An historical analysis of the concept of human “races” shows a very direct link to European colonization of the globe.

Through colonization, minerals and species – including humans – came to be regarded as commodities.  Colonialism has required an ideology that subordinates some peoples as “racially inferior.” This enabled dispossession of land and resources from those who inhabited the places that would now be claimed and colonized by the developing empires of Europe. As a result, systemic racism permeates our entire world, and is linked to climate change in terms of health and in other ways. Decolonizing climate action means addressing environmental racism.

Participation in decision-making, access to information and legal resources are also elements of environmental justice. Finally, environmental injustices include power differentials as well as discrimination and exclusion of different cultural worldviews. For example, historically  western perspectives on climate adaptation and solutions have been prioritized over Indigenous ecological knowledge.

Ask your Member of Parliament to support these bills. Join our advocacy event, Canadian Ecological Justice Bills Letter Writing on Thursday, September 8. We offer two times: noon and 8 p.m. EST.  Learn more about the bills and effective advocacy techniques, and write to and/or call your MP urging action on environmental racism and corporate accountability. Register here for either time.