What is the glue that has kept this ecumenical initiative together? #KAIROS20 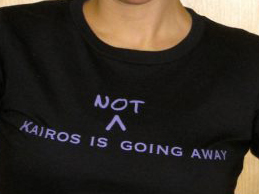 A twentieth anniversary is an occasion to celebrate, to reflect and to give thanks. KAIROS has not only survived but thrived. What is the glue that has kept this ecumenical initiative together? I believe there are several ingredients.

For the churches and organizations that make up KAIROS, there is the shared commitment to faithfully live out the Gospel call to seek justice. This is KAIROS’ mandate.  There is the commitment to church unity. As elusive and as distant as this might seem, ecumenism is one gradual step toward unity. And there is that central tenet of ecumenism calling on churches to act together on issues unless there are doctrinal reasons that make this impossible.

There are also reasons why KAIROS should not survive and thrive. Many denominations are experiencing a continuing decline in their membership. Revenues are falling.

There is the great temptation in organizations that are shrinking to focus on survival. External initiatives may appear unnecessary or luxuries that can no longer be supported as survival becomes the sole focus. What risks being lost if this road is taken?  A great deal should this scenario ever apply to KAIROS.

At risk is abandoning colleagues in many countries who face and challenge oppressive structures and institutions on a daily basis. Lost would be the energy in working together for a world that does not yet exist but which we yearn for and occasionally see glimpses of what is possible.

This 20-year journey has come with challenges. The creation of a new ecumenical agency brought many changes for staff and volunteers in the former coalitions. These changes were easier for some staff and volunteers than others.  This new ecumenical agency had to be built, one brick at a time. For those early board members, this meant keeping their respective denominations and organizations informed of this initiative.   Each member of that first board had to have the Memorandum of Agreement reviewed and approved by their respective leadership. This early journey took patience and give and take. But it happened. KAIROS was created.

The decision by a former federal government in 2009 to reject KAIROS’ proposal for funding from what was then the Canadian International Development Agency/CIDA came as a shock and one that was felt by the development community in Canada. To be clear, it was a shock not because KAIROS members and staff had any sense of entitlement to funding.

The previous program funded by CIDA had received an excellent evaluation. The proposal went through a rigorous (necessarily so) process as it was reviewed by several departments within CIDA, by Canadian Embassy staff in a number of countries where KAIROS had partners, by senior officials in CIDA up to and including the President of CIDA who gave her approval.  This proposal was consistent with Canadian Government priorities and with KAIROS’ priorities and ethics.   So, the rejection was a shock but the response from KAIROS and its member churches and organizations was a dignified one.

The hundreds of letters to the Minister for CIDA, meetings with Government MPs, questions raised in the House of Commons, letters to the editors of big and small newspapers – all to no avail. Were these efforts fruitless and a waste of time? Not at all. The letter writing campaign and meetings with MPs involved members of churches across the country. It was an energizing moment and heightened KAIROS’ profile. The broad support from the international development community was heartening.

While board, volunteers and staff responded in a dignified manner, there was nonetheless a cheeky edge, perhaps best reflected in the t-shirts that said KAIROS is not going away!

All of us connected to KAIROS have highlights of KAIROS moments of these past twenty years. Here are a few of mine.

The Gathering in 2009 in Waterloo brought together several hundred KAIROS volunteers from across Canada.  The morning liturgies were inspiring. Sheila Watt-Cloutier’s powerful presentation about the impact of global warming on the Arctic region underscored an important ethical principle.  Those who produce the least amount of GhG emissions suffer disproportionately whether they are Indigenous people in the Arctic or people living on the island states in the South Pacific.  Warming temperatures in the Arctic affects Inuit and other Indigenous people in so many ways.  Take away people’s right to be cold and their very survival is at stake. [Sheila Watt-Cloutier is an Inuit activist and the author of The Right to be Cold: One Woman’s Story of Protecting Her Culture, the Arctic and the Whole Planet].

KAIROS produces many excellent resources not the least is the Blanket Exercise. Imagine, just this year, in the midst of the covid pandemic, KAIROS staff and network facilitators delivered 230+ virtual Blanket Exercises with over 6,800 participants! As a result of the Blanket Exercise, thousands of Canadians are learning about colonialism and its on-going impact on Indigenous people.

In early June 2015, during the Truth and Reconciliation Commission’s Final Event in Ottawa, several hundred people gathered on the lawn on Parliament Hill to experience the Blanket Exercise. It was a sight to behold. The leadership provided by young Indigenous people that day was inspiring.

As for the future, there is much to do and to look forward to.  Here are a few thoughts about what I am confident KAIROS will continue to do and where necessary, strengthen.

May there be many opportunities for members of KAIROS’ churches and organizations to become actively involved in KAIROS.  Arranging for partners to speak in churches brings an immediacy and a human face to vital issues and heightens KAIROS’ profile.   As the demographic in many churches is ageing, continue to engage young people and young adults.  Continue to strive to become a more inclusive ecumenical agency, drawing in new people with new ideas and insights.  Can more be done to make KAIROS’ excellent resources available in French?  As an ecumenical agency, learning about the theologies and liturgies of other denominations exemplifies what it means to be ecumenical. Collaborating with other faiths builds new friendships with a commitment to work on common causes. Continuing to draw on the insights and wisdom of Indigenous elders gives KAIROS the opportunity to change how it does things and build friendships.

Above all, let us not lose our theological courage!

A word or two about those saints who are no longer with us and who contributed so much to the Gospel call to seek justice. To those who served on the former coalitions and KAIROS – Warren Allmand, Geoff Johnston, Doryne Kirby, Jim Kirkwood, Chris Lind, Anne O’Brien, Jim Profit;  to two outstanding staff who served former coalitions and KAIROS – John Dillon and John Mihevc;   to the partners who have been imprisoned, tortured, assassinated or have been disappeared; to others I have not named – Presente.

There are other ingredients in the glue that holds KAIROS together. Dedicated staff whose work is more than work but is a vocation; leadership from current and former executive directors and managers; active volunteers across this land; dedicated members of the Steering Committee. Finally, here are two more ingredients – trust and friendship. Happy 20th KAIROS.

Stephen Allen served on KAIROS’ board of directors and the steering committee.  He served as Associate Secretary for Justice Ministries with The Presbyterian Church in Canada from 1997 to 2018.