UN Day of Peace –Climate Crisis is a peace issue 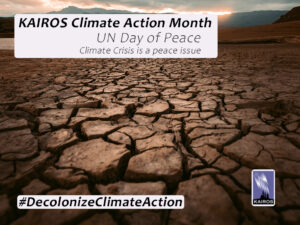 “In order for me to write poetry that isn’t political,

I must listen to the birds,

And in order to listen to the birds the warplanes must be silent.”

Today, on the United Nations International Day of Peace (September 21), we reflect on the role of climate change in conflict. The climate crisis is not just an “environmental” issue.

Wars over natural resources are nothing new. The Intergovernmental Panel on Climate Change reports indicate that water will become scarcer in many places and agricultural productivity will decline. Minerals associated with renewable energy technology are ripe for acquisition or plunder in the transition to a low-carbon economy. Petroleum energy sources are a source of conflict – as we witness in the Ukraine-Russia war – although the world needs to end their use.  Oil has also been linked to declining democracy in petro-oriented national and subnational states, including  Alberta.

We are seeing how changing climates have become a cause of conflict. But, there are mitigating factors.

For example, we know that strong institutions that can mitigate the effects of climate change are important. Hence, Sustainable Development Goal #16: Peace, Justice and Strong Institutions.

We know with certainty that places and countries without strong infrastructure or effective institutions will have more difficulty with responding to changing climate challenges. Hence mechanisms to transfer finances and technology to mitigate against the effects of changing climates are critical.  However, the developed world – including Canada – has not stepped up even to meet existing promises in climate finance.

We know with certainty that women are more affected by the climate crisis, and that women, particularly Indigenous women and women peacebuilders, are critical in solutions to the climate crisis. Based on the feedback of its partners, KAIROS’ Women Peace and Security programme is now focused on the gendered impacts of climate change and responding to the nexus of gender inequities, conflict and the climate crisis. Several COP27 delegates are partners in the WPS program.

The gendered effects occur worldwide. In March 2022, KAIROS Global partners attended the UN Commission on Status of Women (UNCSW66) and spoke about the impacts of climate change, COVID-19 and conflict on gender, including gender-based violence, and the role of local women’s organizations and peacebuilders in building back with ecological and economic justice.

Militarization has direct effects on climate-causing emissions. For instance, the US Military is a bigger carbon-emitter than 140 of the 196 countries of the world. The effect of Canada’s military is also significant. Ironically, the US military establishment recognizes climate change as a security threat.

But a security threat for whom?   More land defenders – mostly Indigenous peoples and women – were killed than any other type of activists in recent years.  At the same time powerful countries can use their military might and alliances to further secure “their” needs  while  legitimate requests of other countries who are facing increasing climate-induced threats are ignored

On this UN Day of Peace, there is a need to recognize that the climate crisis is a peace issue and an urgency to respond.