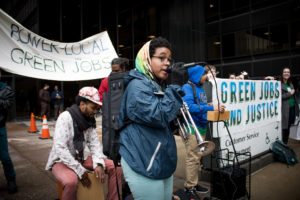 by Rachael Warriner: performers with Hardwork Movement at a youth-led action.

Is climate change a huge crisis or a huge opportunity?  Some Pennsylvania community activists are answering: “Both, if we want it to be.”

In 2016, the Earth Quaker Action Team (EQAT) in Philadelphia launched a campaign to persuade their local electrical utility, PECO, to embrace solar energy.  Their goal: that 20 percent of the utility’s power come from solar energy generated within its local service area by 2025.  This is achievable and would spur a major local employment plan to provide green power skills and training to residents of the city’s most marginalized neighbourhoods, including North Philly which suffers from chronic unemployment and a lack of economic opportunities.

The Power Local Green Jobs campaign kicked off in front of the PECO headquarters in September 2015 when green energy advocates staged a public action involving enormous puzzle pieces.  The puzzle creatively depicted their ultimate vision: a Philadelphia powered by green energy generated in its own neighbourhoods.  One puzzle piece showed the sun shining bright in the sky; another showed rooftops gleaming with solar panels.  Each piece was put into the puzzle until there was only one piece missing: the one for PECO.  Community members walked to the doors of PECO headquarters and asked the utility’s CEO to come outside and insert the missing piece so that their vision could be realized.  PECO refused to send anyone outside and refused to talk with them – the company’s customers – about a green energy future.  But the action clearly got its point across, and in a positive way that was more invitational than confrontational.  These community members were inviting PECO to do the right thing and be part of the climate solution.

Since this initial public action, the Power Local Green Jobscampaign has staged other actions and acts of civil disobedience including a ritual foot-washing ceremony blocking entry to the company’s headquarters during Holy Week. At this year’s action, 18 volunteers were given citations.

Shifting away from fossil fuel powered electricity will significantly lower the carbon footprint of Philadelphia’s households and provide skills training and employment to local young people.

This campaign builds on the success of an earlier EQAT campaign to push PNC Bank, a local financial institution to withdraw financing from corporations who engage in mountain-top removal, one of the most destructive coal mining practices.  With the catchy name BLAM! (Banking Like Appalachia Mattered!), the campaign combined non-violent direct action, consumer “>action, and corporate engagement.  It took years of organizing, educating and advocating, but with enough perseverance PNC Bank met EQAT’s demands in 2015. The young Quakers and other people of faith involved in the Power Local Green Jobs campaign are convinced they can achieve similar successes. 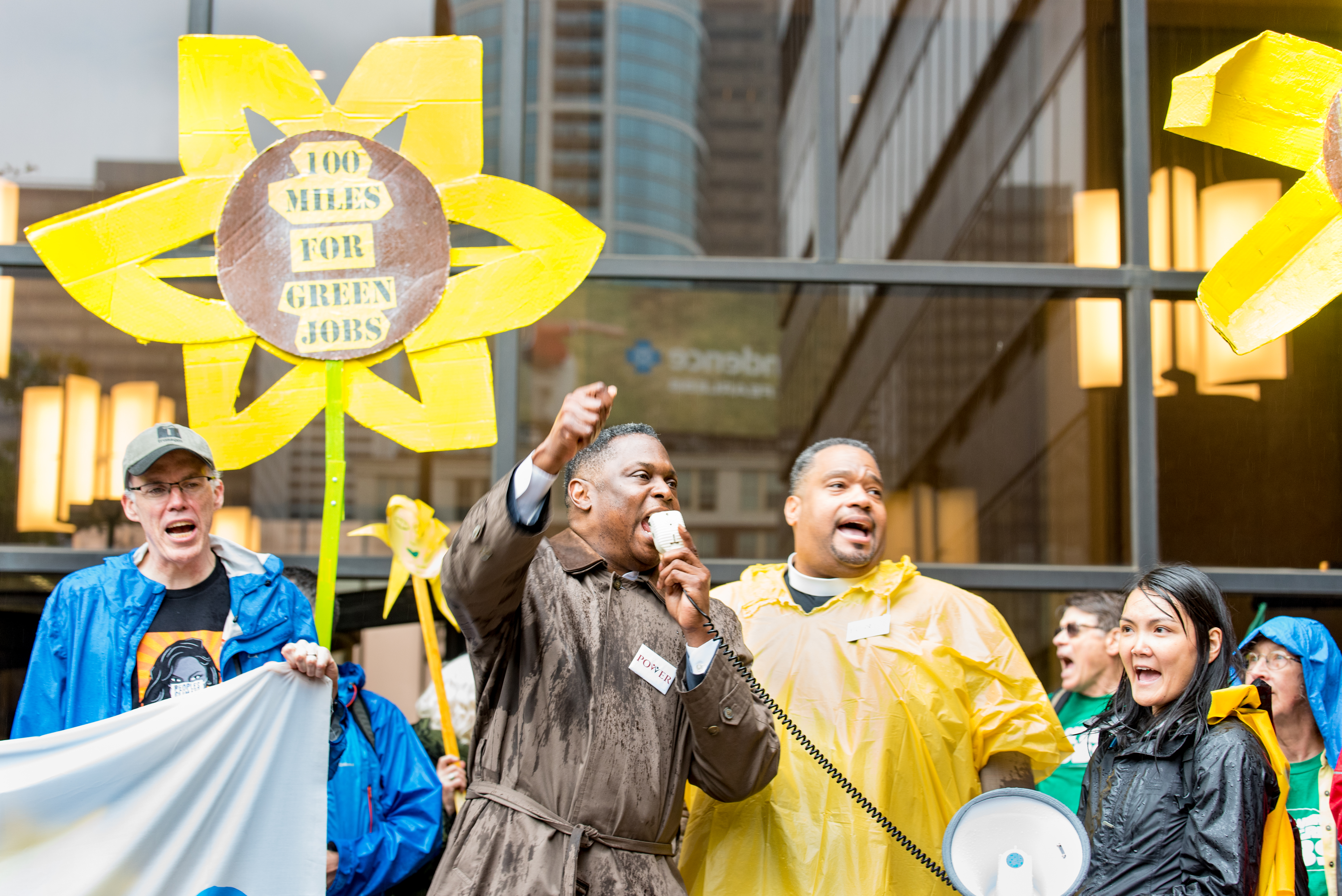 Climate activist Bill McKibben, Rev. Gregory Holston of POWER, and Bishop Dwayne Royster of People Improving Communities through Organizing, at the end of the 100-mile walk for Green Jobs and Justice. Photo by Chris Baker Evens

Since 2016, the Power Local Green Jobscampaign has partnered with a multi-faith community advocacy network called POWER (Philadelphians Organized to Witness, Empower and Rebuild).  Local church ministers, rabbis and other faith leaders are engaging their communities in the call for a greener energy path and local jobs. The campaign is also expanding into neighbouringcounties around Philadelphia that are also served by PECO.  Last spring, the campaign walked 100 miles through each county of PECO’s service area, making connections between the struggles of urban and rural communities, communities of color, and de-industrialized areas. Getting more of PECO’s customers to pressure the company to commit to local green power is key to winning green jobs.