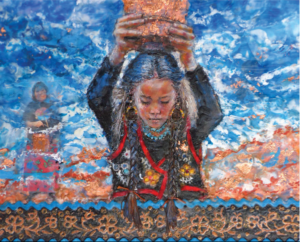 Art from Our Future: How Kids Are Taking Action by Janet Wilson (Second Story Press)

Art from Our Future: How Kids Are Taking Action by Janet Wilson (Second Story Press)

We all have a right to this water as we need it – not just rich people, all people. No one should have to worry if the water is clean or if they will run out of water…Now is the time to warrior up and empower each other to take a stand for our planet. We need to sustain the little we have now and develop ways not to pollute the environment and sustain relationships with Mother Earth and save what we have left.

From a young age, Autumn has gained recognition both nationally and internationally as a protector of clean water, not only for Indigenous communities but for all. Her identity as an Indigenous woman has played an important role in her actions to protect water.  In an interview with CBC, Autumn explains this connection, “I am from this land. My ancestors are buried here on this land. This land is our land and it’s part of me and part of everything I am and everything I do.”

In 2016, Autumn’s passion to protect water caught the attention of Prime Minister Justin Trudeau. She was chosen from among her peers to present a traditional water bundle to the Prime Minister at the 2016 Assembly of First Nations’ annual winter meeting. At the gathering, Autumn voiced her disapproval of the government’s decision to approve the expansion of the Trans Mountain Pipeline and made the Prime Minister aware that she was not happy with the decision.

Autumn Peltier is now a role-model, not only in her community, but to youth and leaders around the world.  In 2017, Peltier was the only Canadian nominated for the 2017 Children’s International Peace Prize. She was nominated again in 2019 by the David Suzuki Foundation.

As a young Canadian, Autumn represents a growing demographic of climate change activism. Adult apathy is being challenged by a call from youth around the world for urgent action. Autumn and other youth, like Greta Thunberg are challenging decision-makers and trailblazing a way forward for all in the face of climate change.  In January 2020, Peltier addressed the World Economic Forum in Davos alongside Thunberg and others calling for more urgent action to address the crisis.

When speaking to the UN General Assembly, Peltier said that one day she will be an ancestor and wants her great-grandchildren to know that she tried hard to fight so they can have clean drinking water.

Also of interest for World Water Day: A Children’s Reflection