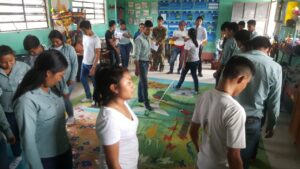 An internationally coordinated KAIROS Blanket Exercise that highlights the impacts of colonization from Indigenous peoples’ perspectives will be presented in in Adelaide, Australia on September 26 during the World Indigenous Peoples’ Conference on Education.

This World KAIROS Blanket Exercise amalgamates scripts from Australia, Canada, Ecuador and Guatemala, highlighting common themes and unique impacts of more than 500 years of colonization on the original peoples of these lands.

This year marks the 25th anniversary of the creation of the KAIROS Blanket Exercise. Created in 1997 the KBE, has grown to go beyond the colonial borders of what is now known as Canada.

The World KAIROS Blanket Exercise as a tool and process means dialogue, relationship building and solidarity between Indigenous people globally. Indigenous people from Turtle Island (North and Central America), Abya Yala (South America, Ecuador) and Australia come together in person to share their stories and world views and resist colonization. The World KBE at WIPCE 2022 highlights the importance of community generated models.

The World KAIROS Blanket Exercise is a participatory, interactive teaching and learning tool that brings together education and awareness of Indigenous people’s history from an Indigenous world view to both Indigenous and non-Indigenous peoples.

Speaking from their perspective about the importance of a World KAIROS Blanket Exercise that combines the stories and experiences of Indigenous people from different parts of the world, Gloria Gonzalez, aMaya-Achi woman from Rabinal, Guatemala says:

“We need to tell our stories of the persistence and resistance to make visible the history and the experiences of Indigenous peoples in defense of the territories for the good living (El buen vivir). Tell the world that as indigenous peoples we are here, convinced of the importance of joining forces, uniting voices and ideals and following in the footsteps of our ancestors.”

There are versions of the KAIROS Blanket Exercise in the USA, Australia, Guatemala, and Ecuador. The COVID-19 pandemic put a halt to the work in progress in the Philippines and in Colombia. We hope to re-connect as soon as conditions improve and continue the work with local Indigenous peoples and community partners.

The idea of a World KAIROS Blanket Exercise started in 2019 when Professor Simon Forrest, a former Elder in Residence at Curtin University in Perth, Western Australia visited the KAIROS office in Ottawa to discuss his plan and vision for a Western Australia version of the KBE. He came prepared with a first draft of materials he had put together following his experience of the KBE at the WIPCE 2017 in Toronto.

Prior to that, in November of 2018, KAIROS met with Thelma Parker and a delegation of the EREA (Edmund Rice Education Australia), who had also developed a draft KBE version for Eastern Australia and presented it to KAIROS. The KBE team at KAIROS provided feedback thus formalizing the first collaboration agreement with Australian partners.

Interest in the KBE from international partners goes at least as far back as 2015, when Ana Guadalupe Matzir Miculax, a Maya Cakchiquel young woman witnessed the first Mass KBE in Ottawa when the Truth and Reconciliation Commission of Canada presented their final TRC report and 94 Calls to Action. When the mass KBE concluded Ana asked: “Do you have it in Spanish, and could I take this to share with my community and develop a version based on our local history?”

“I witnessed the KAIROS Blanket Exercise on Parliament Hill and learned about the history of Indigenous peoples in Canada through this creative and participatory exercise. This brought out many strong feelings – memories, pain, sadness, and tears – but above all the courage and reflections in the activity were a source of motivation to better understand the reality and to struggle for justice, equality and respect among all peoples so that this history that marks our lives in the present is never repeated.”

Ana opened her reflection by saying:

“The histories of Guatemala and Canada are similar – histories of trying to erase our customs, languages, traditional clothing and dance; our way of life and world view; and, our relationship with nature. The result is many Indigenous people do not know their own identity and history.”

We collaborated with Ana on a Spanish translation, later working with the Nueva Esperanza Foundation in Rabinal Achi, Baja Verapaz, Guatemala. In 2016 at the World Social Forum in Montreal, Canada, our dear friend, the late Gloria Chicaiza from partner organization Acción Ecológica, made the same request, this time to initiate the process to bring the KAIROS Blanket Exercise to Ecuador.

In 2019, KAIROS visited Eastern and Western Australian partners. We discussed the idea of a World KAIROS Blanket Exercise again and agreed to present a proposal for WIPCE 2020. COVID hit and all plans came to a halt.

WIPCE proceeds in September 2022.The World KAIROS Blanket Exercise was selected from 850 proposals as one of the 272 workshops on offer.

While our participation at WIPCE is highly rewarding and inspiring, the process brings to the surface the fact that we are still living under colonial systems and states. After taking Indigenous peoples’ land across the world, ‘so-called’ developed countries deny the free movement of Indigenous peoples. We experienced first-hand the humiliation of a visa application denied to the President of the Kitu Kara Nation in Ecuador and a member of the World KAIROS Blanket Exercise Working Group to travel to Australia to attend the conference. A dignitary and Indigenous person was denied the opportunity to bring his community’s voice directly to WIPCE 2022.

KAIROS is proud to support our partners. We have navigated with them through the frustrating and humiliating world of immigration and visa applications process. We often have no choice but to find much longer and more expensive routes to avoid the visa requirements of European and North American states, a sign that colonialism is still alive and well. Despite the barriers and challenges, KAIROS is thankful for the resilience of our partners. They do not give up and are open to exploring alternative ways to bring their voices and speak for themselves at WIPCE 2022. We are also deeply grateful to the individuals and communities who generously continue to support KAIROS’ work. This is a small sample of what you support.