“Territorial Feminisms and Diverse Ecologies”: A series of virtual gatherings on women and land defense 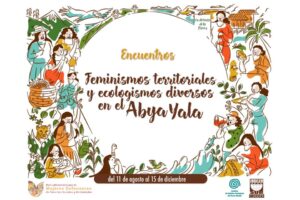 The Latin American Network of Women Defenders of Social and Environmental Rights, a KAIROS partner, will be hosting a series of virtual gatherings collectively called “Territorial Feminisms and Diverse Ecologies”  from August to December 2020.

The ten gatherings are organized around themes related to women and land defense, such as environmental racism, South-South alliances for the defense of lands and bodies, environmental violence against women, communitarian economies, etc.

All gatherings take place on Tuesdays and start at 9:00AM Ecuador time (10:00AM EDT, this will change once Daylight Saving Time ends). For more information on each gathering, a list and bios of all speakers, and Zoom links read the program booklet. Follow the Latin American Network of Women Defenders of Social and Environmental Rights on Facebook and Instagram for updates.