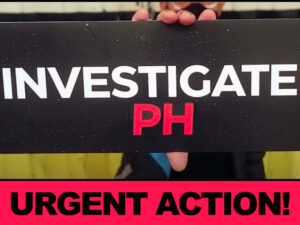 Hundreds of thousands of Indigenous peoples, land and human rights defenders, and low-income people are being displaced, terrorized, jailed and killed in the Philippines by their own government.

SEND A LETTER TO YOUR MP NOW!

INVESTIGATE PH is documenting these abuses in a series of three reports. The second report, released on July 6 and submitted to the UN Human Rights Council, found that state-driven violence is escalating in the Philippines.

In the absence of effective domestic remedies for these abuses, the world is called to act in support of the victims.

Using this form letter, write to your Member of Parliament urging Canada:

It documents how the Philippine government’s anti-terrorism operations are increasingly targeting unarmed Indigenous people who are resisting the encroachment on their lands by resource companies, which include those from Canada.

Recently, the International Criminal Court opened an investigation into crimes against humanity perpetrated by the Armed Forces of the Philippines, demonstrating that the Philippine government is failing to take meaningful steps in stopping human rights violations.

This letter writing campaign will end on Sept 13, 2021, in anticipation of the next meeting of UN Human Rights Council and release of the third INVESTIGATE PH report.  Please share this urgent action with your networks and encourage others to write letters.

Your voice is important. Please join KAIROS, other civil society organizations, churches and fellow citizens in urging Canada to speak up in defense of partners and communities in the Philippines.