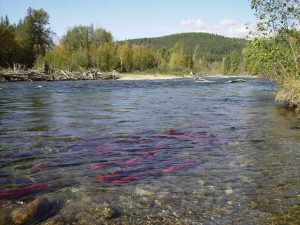 The Biblical event when Jesus was baptised by John the Baptist in the Jordan River was witnessed by a lot of people including God, his Father. Someone remembered the event and eventually wrote this down on paper so that we could read about what had taken place between John the Baptist and Jesus and ponder the meaning of Baptism for Jesus back then and for us in our time.

Witnesses are very important in the Indigenous community of the Squamish Nation where I am from. One example is after a funeral luncheon, there is a special ceremony by which several people are called by their name (usually ancestral, but sometimes common name) to witness what is going to take place. They are given fifty cents, not as a payment but more as an assurance that what they witnessed, saw and heard, will be told accurately and truthfully spoken to whoever may ask them about who was there, what was said or done, and what the date was.

The reason for asking several people to be witnesses is in case someone forgot a few details or they may have passed away. Very young children do not understand a death in the family and the significance of that death, the loss, the emotional toll on people, and they may not even remember over time who the person was who died in their family. In recent years people are choosing younger witnesses. As a young person the witness’s mind would not be cluttered with adult messages, and mannerisms, thus freeing them to speak the truth honestly and with purpose. It is the young witness’s job to be the memory for the children who are now older and ready to hear about who was the family member that died.

Another example of witnessing in the case of funerals is where families help each other with the expenses related to the cost of the funeral service by giving money to the bereaved family. The givers state to the spokesperson what the money is to be used for, such as helping to pay for the coffin or the headstone. This is then announced to all the witnesses and people gathered there that this is how the money will be spent. There will be recorders to write down on paper who gave the money, the amount given for this person and the way that the money will be spent. The reason for the written record is so that when a sponsor family has a loved one who passes away, the recipient family will return the amount of money that was given to them to the sponsor family for whatever way the family needs the money. The thread of life interwoven over the years with other human beings on their faith-filled journey began a long time ago with our ancestors, does not end here with physical death but continues now in the care of our Creator, God. We are then grateful for the work and teachings that Jesus gave to us to help prepare us for our heavenly journey.

You may think that Jesus didn’t need to be baptised by John the Baptist as he had no sin. Other people had confessed their sins and then were baptized and cleansed of their sins. However, by accepting John’s baptism, Jesus configures the ministry of baptism in motion as the Baptist stated that he baptizes with water but Jesus will baptize in the name of the Holy Spirit. The rite of baptism eventually evolved to what it is today as the first sacrament in our Christian faith. As Christians we are called to witness and participate in the Sacrament of Baptism and to act on the continuation of this sacrament in the life of faith. We need to ensure that our children grow up in the faith by receiving the nurture of the church. Baptism is the gift that keeps on giving by connecting family relatives and community together in our Christian faith. This is the beginning of a new life, born again in the faith community where not only the parents and Godparents, but all of us are needed to help keep the new member of the kingdom of God on the right path.

In the Indigenous community water is used in ceremony and rituals. River baths are similar to baptisms for cleansing of bad things which may attach to the individual; much like sin attaches itself to us. In the river ritual, the person faces upstream to receive good things and faces downstream to let go of bad things. Like the people that John baptized in the Jordan River who were cleansed of their sins, the Indigenous river bath cleanses the bad things away by facing downstream and letting go of them. The person is then free to move on with their life and do good things for people they meet. Also like the sacraments, there are many rituals and spiritual teachings which are meant to keep us on the good road, known as the red road. All of these teachings come from God our Creator and are given to all children no matter where they come from. Amen.

Deacon Rennie Nahanee is an Elder from the Squamish Nation in North Vancouver and is posted to St. Paul’s Indian Catholic Church in the community.

This reflection is excerpted from Gifts for Another Way, Epiphany Year B Resource for Justice Seekers, available through KAIROS.