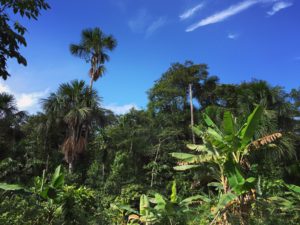 Last night as I drifted to sleep… my heart hurt — I had nightmares and tossed and turned wondering how we got here. Not just in Alberta, but in the US, in Brazil, and all over the world – fascism and hate is on the rise. The sacrifice for ‘their’ rise will be the people on the frontlines fighting to protect the natural world, and all life will suffer if we don’t stand up.

I just came home from South America (Brazil, Colombia & Ecuador) where I was witness to the immense beauty of the natural world, vibrant movements and people, juxtaposed with the cost of fascism and tyranny over people and the planet.

Travelling down the river in the Amazon rainforest

My heart hurts because as I traveled down the river in the Amazon rainforest it reminded me of home. The people, the sounds, the look and feel of the river and the forest was like home. Like the Athabasca. It felt familiar and foreign, the night sky and plants so different and yet so connected. Yet, it was painful, because the Waorani are at the crosshairs of colonization, capitalism and imposed government sanctions of their territory for oil and gas. They are protesting and waging court battles and taking action. Something my people know all too well, and something I know only works if we are all in it together.

The calmness and the deep spirituality that exists in the forests is the same here. I could see my relatives in their faces — cousins, aunts, uncles, grandparents, siblings and even my own mom. As Nigel Henri Robinson remarked, ‘it’s the Rez of the south, except they can feed themselves, and probably drink the water,’ we laughed. We laughed not because it was funny but because we had to in that moment. A moment of clarity of the immense connection and difference.

They all thought Canada was such a great place until we shared our own struggles against oppressive government regimes, policies and practices, against multinational oil and gas corporations and the costs these systems not only have on our lands and territories but our people.

As I sit here this morning, I am not only worried about the Waorani people and the Amazon, but my own people and lands and territory. I write this through tears for the rivers and forests that connect us, for the animals and plants and for our people. I am scared for the future for all life on this planet.

We are in a war right now, a war against time, and one built from disconnection and ambivalence. A war forged by capitalism, colonialism, white supremacy and patriarchy. One that aims to sever our connection to each other and to the living world.

We need to wake up and see these connections. We need to come together and share our skills, our teachings, our strengths, our stories and our hope we can turn the tide on what’s happening the world over.

Eriel Tchekwie Deranger is a Dënesųłiné woman (ts’ékui), member of the Athabasca Chipewyan First Nation and mother of two, coming from a family of Indigenous rights advocates fighting for the recognition, sovereignty and autonomy of their Indigenous lands and territory in what is now known as Treaty 8, Canada. Deranger is the Executive Director and co-founder of Indigenous Climate Action (ICA) – an Indigenous-led climate justice organization working to empower communities and inspire Indigenous-led climate solutions. ICA develops educational multi-media and contemporary climate change resources for Indigenous communities (short documentary series, webinars, podcasts, and on/offline journal of writings, essays and short stories) curated and produced by Indigenous peoples.