Spirited Reflection: Take up your load 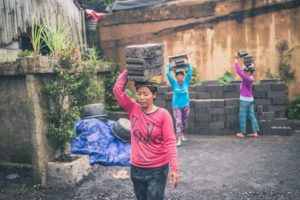 In the days following Jesus’ resurrection, the disciples experienced a range of emotions. At times, they were amazed. At other times they were terrified and convinced they would never have the courage and strength to take up the load Jesus expected them to take up.

After the resurrection, Jesus appeared to his disciples on a number of occasions over forty days. He walked with them; he showed them his scars; he broke bread with them. And he encouraged them to have faith and to be strong. They would not be alone. He would be with them.

The apostles wrongly assumed that the time had come for Jesus to restore the political kingdom. After all, isn’t this what messiahs are expected to do? Not even the extraordinary event of Easter and the events in the following forty days had shaken the disciples’ assumptions of what Jesus would and could do.

The early church was an anxious, fearful and fragile community. It had no power of its own. How would it ever find the courage and the strength to take up the load once Jesus left them? Jesus said to them “…you will receive power when the Holy Spirit has come upon you”. [Acts 1: 8]

So, if Jesus was not about restoring the old Davidic monarchy, then what? What load would they be taking up? Jesus told them: “…you will be witnesses in Jerusalem, in all Judea and Samaria and to the end of the earth”. [Acts 1:8].

The disciples were to go into the world and proclaim repentance and forgiveness to all nations beginning in Jerusalem. “You are witnesses of these things”. [Luke 24:48]. Bearing witness is not a passive act, but an active one. The disciples had an ethical responsibility to share what they have learned and what they have seen.

Jesus then left them and contrary to the anxiety and fear they had felt before, the disciples returned to Jerusalem . . . “with great joy” [Luke 24:52] ready to take up the load.

There is a song by Bruce Cockburn that I think resonates with the readings from Acts and Luke. The song is called “Forty Years In The Wilderness”:

Forty years in the wilderness getting to know the beasts

Projected and reflected on the greatest and the least

Forty years of days and nights – angels hovering near

Kept me moving forward though the way was far from clear.

Take up your load

Run south to the road

Turn to the setting sun

Got to cover some ground

Before everything comes undone.

· experiencing the Blanket Exercise and learning about a history most of us were never taught.

· writing to members of Canada’s Senate urging them to support Bill C-262.

· It could mean reflecting on how my congregation and denomination are doing in terms of living out that excellent road map the Truth and Reconciliation Commission gave us – the Calls to Action.

· Or it might mean walking with and learning from Indigenous brothers and sisters.

· Our load could challenge us to support migrant workers and urge the Government of Canada to sign on to the International Convention on the Protection of the Rights of All Migrant Workers and Members of Their Families, adopted by the United Nations General Assembly in 1990. Few migrant-receiving countries, including Canada, have signed on to this Convention.

Regardless of the load we take up, may we do so faithfully and joyfully, to the ends of the earth! Alleluia

Note: “Forty Years In The Wilderness” is on Bruce Cockburn’s latest cd Bone on Bone. The song can be heard on youtube: https://www.youtube.com/watch?v=DyrbVJ3R9EQ

Stephen Allen represented The Presbyterian Church in Canada on KAIROS’ board of directors and steering committee for a number of years up to June 2018. He also served for over twenty years as the Associate Secretary for Justice Ministries with The Presbyterian Church in Canada. Since retiring in 2018, Stephen has more time for music and volunteering, including serving as chair of the Indigenous Rights Working Group at the Church of The Redeemer, an Anglican parish in Toronto.