Spirited Reflection: Renewing our relationship with the watershed 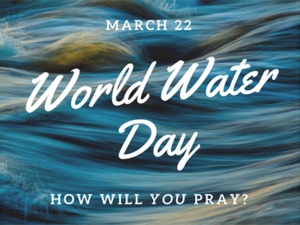 We ALL have a relationship with these bodies of water. They sustain our lives. Even before leaving home this morning, every one of us interacted with the watershed in one way or another. We took a shower, drank water from our tap or made a pot of coffee, put on a freshly washed shirt or dress, or turned on a light powered by hydroelectricity. Each activity in our daily life is intricately linked to our local watersheds. But we tend to think of the watershed as a system separate from us. As an ecosystem of water, plants, animals, and insects. As nature. Something separate from humans.

The separation of nature and human can be seen anywhere humans have settled, not just in cities, although this is where the separation appears most stark. The urban grid of roadways and settlements imposes an unnatural landscape on the natural landscape. We cover streams and rivers with roads and twist water in other directions in order to build. We channel the water we use underground. Out of sight. Out of mind. Over time, this separation has served to alienate us from the watershed.

And it’s not just modern urban planning that is responsible. We do not normally identify ourselves by the watersheds we live in. We identify ourselves by political boundaries—a municipality, a province, or a territory—which bear no resemblance to the natural flow of water across the land. In some cases, political boundaries have been drawn right down the middle of rivers or lakes, separating communities supported by that body from one another.

Mapping and urban planning are products of civilization and industrialization, founded on acts of exploitation and empire. Empire –where people are and where wilderness is seen as a place where people are not. Over time, civilization and industrialization have served to strengthen this separation by teaching us to treat water as a commodity to buy and sell; a resource to be managed; something to be controlled. All of this has served to separate us from water, to forget its sacred properties, to forget our role in the watershed.

An Anishinaabe song written by Doreen Day about water goes, “Water, we love you; we thank you; we respect you”. When I first learned this song, I realized that I had never expressed those sentiments to water in that way before, as if I was talking to another being, a friend, or a relative. The words are simple, but they convey a powerful relational connection. Theologian and educator Denise Nadeau explains the meaning of these words as part of a larger Anishinaabe teaching. The Anishinaabe way of life is centered on relationships, each of which carries responsibilities. In this case, we, humans, have a relationship with water, with our local watershed and that relationship carries responsibilities. She says if people feel that relational connection to the watershed in which they live, it is easier for them to act upon their responsibilities.

So how do we restore that relationship that has been broken down by years of control, exploitation, and separation? Denise Nadeau says that ceremony helps remind us of our relationships. Indigenous peoples have many traditions and ceremonies that remind and restore their relationship to water every day. In one Anishinaabe tradition, you keep water by your bedside and when you wake up in the morning, before doing anything else, you take that water and you repeat the sentiments from the water song. Water, we love you, we thank you, we respect you. And you drink from that cup.

In Christian traditions, baptism connects us to water – a sacred act of cleansing and reminder of water’s life-giving properties. In the story of Jesus’ baptism we see the relationship with the watershed being confirmed in a powerful way. While others were baptized in the River Jordan by John the Baptist, Jesus was baptized INTO the river, INTO the watershed, becoming a living breathing part of this inter-dependent system. If we consider faithful baptism into the watershed, thinking beyond the font to where the water came from, we come to a much more intimate immersion into the watershed where our existence is interdependent with all living things.

It is this intimate connection that will compel us to protect our watersheds. During Lent, we are reminded of Jesus’ time in the wilderness, resisting temptations. Like Jesus, we too are tempted. We overuse, over-consume, and forget what is sacred. Jesus drew strength from his time in the wilderness and we should consider this as a watershed opportunity for us as well.

Whichever Lenten discipline you have chosen, consider reconnecting with your local watershed as a way to draw strength to observe that discipline. Consider active meditation in the woods, on a trail, or on the shores of a local body of water. Maybe you will begin by learning what watershed you live in, what other species live alongside you, what threatens the well-being of your watershed?

When we immerse ourselves in this way, we can deepen our connection to water, compelling us to protect the watershed. And in Canada our watersheds need protection. They continue to be threatened by mining, fracking, pollution from industry and from agriculture, groundwater depletion, and more. Water has become polluted and commodified. Put simply by Anishinaabe Grandmother Josephine Mandamin, “the water is sick.” In our cities, our waterfronts and harbours have been the subject of intense industrial and urban development. Climate change has brought more intense weather, causing our creeks to swell at times, eroding the land and flushing toxins downstream, and at other times, our lake levels to drop.

Canada’s new environmental legislation may restore some protections to our waterways but it will require Canadians to be active in advocating for our watersheds and calling for their protection. If we want to live in right relation with creation, we must begin to re-conceive our identity with the watershed and the actions that continue to exploit and threaten its health.

But let’s start with simple acts of renewal this Lenten season. May this season of Lent be a time we can renew our relationship with the waters that sustain us. Water, we respect you.

Beth Lorimer is the Ecological Justice Program Coordinator at KAIROS Canada. She coordinates KAIROS’ Reconciliation in the Watershed program which calls for renewed relations of ecological integrity and justice for Indigenous peoples. 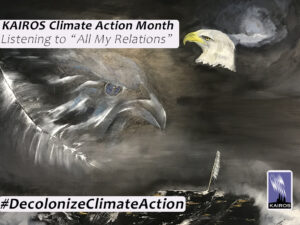 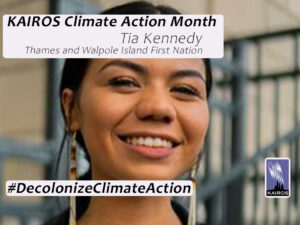 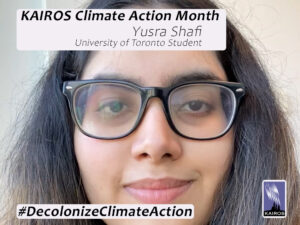