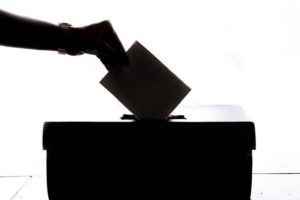 (or. . . As a spiritually grounded millennial who grew up in the United Church – why vote?)

It’s often said that people shouldn’t talk about religion or politics at family gatherings, at church meetings or on the campaign trail. I disagree. I see it as an opportunity to challenge our listening skills and our different ways to understand each other’s perspectives. It’s difficult though isn’t? Especially when you feel you’re alienated and unheard already in the church and when you already feel disenfranchised with our current political discourse. It is hard to hear those individuals who disagree with you. Politics and faith test those muscles that we don’t often flex: listening, empathy and understanding.

Not your typical 15-year-old.

Let me take you back to 2001. I wasn’t your typical 15-year-old, I would watch election night coverage of every federal or provincial election that I could. I wasn’t a member of a political party at that time. But boy did I love watching elections.

Nor was I the typical 15-year-old when it came to church. I was a member of presbytery, an elder in my home congregation, a youth group leader and I didn’t miss a Sunday of worship.

The United Church taught me how to be a member of my greater community. And who knew that 5 years later I would have my name on the ballot in 2006 at the age of 20? And only three years later in 2009 I was elected as the youngest MLA to ever be elected in Nova Scotia at the age of 23 years old and serving as the Government Whip until 2013.

I know it often feels that the political times we are in are those of division, hate and fear instead of hope, dreams and optimism. I mean it’s hard not to be frustrated or angered by what we’re seeing in our politics today. I’ve been there, got the t-shirt and the tattoo, so to speak. I get it.

In those 10 years and in those elections that I work on now, I can tell you, democracy isn’t perfect. But here’s the kicker—neither are we. We are always evolving and so are our systems.

Our church is at the forefront of many of the equality, environmental and social justice fights. That’s who we are, that’s what we believe and that’s what Jesus would do.

I’ll leave you with this, there is literally only one day every four years in our country where from the western-most tip of British Columbia, the most northern tip of Nunavut and the eastern-most point of Newfoundland are equal. There is one day every four years that those at the top and those living in poverty, those of different origins, those of different faiths and those climate deniers and climate activists have the same power. There is one day that our being on this planet is the same— we are one vote, one voice, one country and that, my friends, is on Election Day.

Democracy is not something to take for granted. Go deeper than the sound bites and tweets. Vote with your heart and your convictions. Ultimately vote, you can make a difference, it is not a cliché.