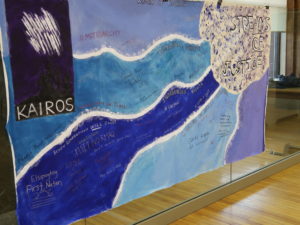 An excerpt from Jennifer Henry’s Opening Remarks, Streams of Justice at the KAIROS Atlantic Gathering in May

Ecological Grief.  A new phrase to capture the profound destruction of our natural environment, a loss for that which we hold dear–in our bodies, in our bones–whether it be orca or grasslands, rivers or bees, islands or glaciers.  A more devastating loss for some, for whom it is inseparable from sovereignty, culture, and spirituality.  This violence to the earth, our Mother, is interconnected to violence to women’s bodies—mothers, sisters, daughters.  This grief, here at home and around the globe, leads Indigenous leaders, Indigenous women, to put their lives on the line, in creation’s defence. We grieve them too—precious land defenders, water defenders, killed.  Berta Caceres, presente.  Is this just what we do? Grieve-

Also, to organize, to educate, to resist, to build.  To hope, to remind each other why we keep going, what is possible, what we will not accept until it is transformed, until it is just, until it is life and wellbeing for all peoples and the earth.   We grieve, yes.   And refuse—by our embodied action–to let death be the last word.

I wonder if the earth is our best teacher.  She grieves, yes, and comforts with her resilience and beauty.  Perhaps most importantly, the earth heals, eco systems can renew, rivers can regenerate, when we stop the wounding, when we come alongside in justice and care.

I am so aware of the Elders, who in continuity with their ancestors, have always held these lands and waters in deep respect and strived to honour traditions despite the fiercest colonial attempts to deny and resist them.  I lift my hands to you.  And also to the generations of diverse peoples who have lived their lives in a stream of justice, supporting rights relations on issues from fracking to human rights in Guatemala, anti-black racism and migrants, refugees and water protection.  For those who claim that work as KAIROS, we are honoured.

My hope is that we can discern the connections between Indigenous rights and gender justice, between ecological justice and anti-racism.  But also build connections among regions—territories, provinces, towns in this beautiful Atlantic watershed.

Between nations—nation to nation here on Turtle Island but also with Colombia, to the Philippines, to Palestine.  It is vitally important to have global partners, as they remind us that where to stand up, to speak up, is to risk your life.  I hope we find the connections between the sacred—however we understand that—and the daily challenges of this world.

My hope is that if we strive to live at the intersections—the points where the streams flow into the river—that we will be living in kairos time.  That time—that moment is when we are finding a way to act, a renewed way to act in justice in our world, no matter what.

KAIROS, the organization, has always been about the “in betweens”—both local and global, both churches (institutions, yes), networks and movements of people of different faiths and conscience, both human rights and ecological justice, both education and action, both healing and justice, Indigenous and settler and newcomer.  We do this imperfectly, but when we are at our best—the most KAIROS—is when we are in the messy “in betweens,” in the intersections, in the “both, ands.” In my understand of the sacred, it is in those “in betweens”—that the Creator or Great Spirit can easily be found.

This is undoubtedly a time of increasing polarization, of hatred visibilized in violence, a time of divisions based in exclusion.  And there is nothing more radical, nothing more hopeful, nothing more powerful—than people, communities, peoples standing up for one another:  Calling governments and corporations to account.  Putting our hopes not just in our own dreams, but in and alongside the dreams of others.  Maybe even the dreams of the earth itself.

For some of us, with unearned privileges, this requires truth, and repentance, and listening, and acknowledgements of complicity.  For all of us, it is about showing up, for each other–open hearts, a hopeful vision and a commitment to leave no one behind.

We grieve because we love.  The work of justice is the public face of love.  We come together, we organize, we act.  And we make hope real.  Let us mourn and organize.  Let us come together in movements that link us to the beautiful troublemakers of ancient times, and generations of hope-filled people yet to come.  Let us carry the dead in our hearts and in our struggles for their lives can be our inspiration—presente.

In this time, this kairos moment, let us meet hope in one another, so that strengthened, we might go beyond this place and continue to make hope real in our aching world.

Jennifer Henry has served as Executive Director of KAIROS: Canadian Ecumenical Justice Initiatives since 2012 and spoke at the KAIROS Atlantic Gathering in May 2019. She has worked in ecumenical social justice for over 26 years.