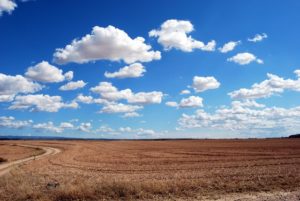 The First Sunday in Lent

“A wandering Aramean was my ancestor” …. (Deuteronomy 26:1-11) So begins a recitation of the history of the people who wandered, were enslaved in Egypt, and then, through the Exodus, eventually came to the promised land. In this spiritual tradition affirmation is closely allied with physical geography—the land—for in wandering, from western European experience, identity and locus are deeply entwined. The question “where are you from” is an acknowledgement that our identity is in part defined by our geographical origin. For the people of Israel in this chapter of the book of Deuteronomy their identity is rooted not just in their past, but in their future: arriving at the “Promised Land”. Through remembering their past oppression and lack of rootedness, they are able to strain into the future to find a place to call their own free from the injustice and oppression of Pharaoh.

We too quickly forget, however, that the promised land was already occupied by others, and that the promised land can be taken only by conquest. This occupation has been justified as being Divine will and irreversible: it has been identified as compensation for oppression under Pharaoh. “Our God is better than your God” has been a rationalization for war, violence, and injustice. Inherent in such thinking the concept of ownership: this is mine/ours, and not yours.

The liturgy described in this chapter of Deuteronomy should remind us of our relationship and dependence upon the land, but has been skewed to justify ownership and power, exclusivity over inclusivity, privilege opposed to mutuality. The imposition of the concept of ownership—which is a false one—has disenfranchised the Indigenous peoples of many countries. We have devolved the reality of land held in common into a compartmentalized construct that allocates to some but not to others. And we are reminded by our Indigenous sisters and brothers that land is not owned but something we live with and on; we have come to justify extraction industries and exploitation of natural resources as an inalienable right and a natural way of being.

It is understandably tempting that in a part of the world, such as the Middle East, where there was constant invasion and violation of artificial borders, that the desire for a fixed and settled geographical location is comprehensible. But this may be false thinking: if all of creation is the gift of the Holy One, land cannot belong to one individual or group of people: we are part of creation, and not separate from it.

Hence, the temptation of Jesus in the Luke reading is the temptation of power “over”, rather than power “with”, and that is a very compelling temptation. “Power over” is a symptom of ownership: it is not mutual, collaborative, or reciprocal. When people ‘discover’ a new land, it is only new to them, not to its inhabitants, or to the Creator. Our relationships can only be genuine when they are nurtured with wholeness and honesty, love and respect. It is vital that we remember “a wandering Aramean was my ancestor”, for we are all called to wander in Creation, not in our own creation.

Rev Don Uhryniw describes himself as “the clergy type at Emmanuel United Church”, Peterborough, Ontario, involved with justice issues for a long time.