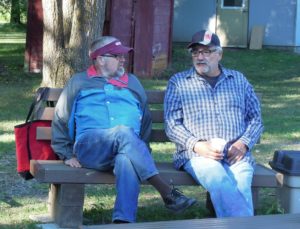 In my work with Christian Peacemaker Teams (CPT) over the past 10 years, I have become very aware of the influence that Christianity has had in colonization around the world. Through the voices of our partners from Colombia, Iraqi Kurdistan, Palestine and Canadian Indigenous peoples, CPT has recognized the reality of how Christians have not always walked in the way of Jesus.

The Doctrine of Discovery decree, written by a major religious leader (Pope Alexander VI) in 1493, claimed that all land found not to be inhabited by Christians was there for the taking. With that pronouncement came the ideology that any persons living on that land were savages requiring salvation from their pagan beliefs. This dogma offered license to Christians to use the gospel message as a mandate to coerce, isolate and abuse. This continues into 2018, as the spiritual beliefs of Indigenous peoples are often deemed “less than” and something to be changed.

One day I was listening to a sermon on the conversion of Saul, a man who used violence against Christians in the years of the early church. I was struck that the story could be rewritten to tell of ‘Reverend Saul’, a Christian leader, who used similar terror tactics toward those who believed differently. A man, who required a change of heart to walk in the way of Jesus, experienced a radical encounter with the sacred/spiritual.

Meanwhile, ‘Reverend Saul’ was breathing out threats against those who believed in Creator and who desired to protect Mother Earth. He went to the highest religious leader in the land and asked for letters to allow him to isolate and convert any he found to worship in what he deemed “pagan ways”. With this permission in hand, he began his journey. As he neared the city of Muddy Waters a fierce storm arose, and a huge lightning bolt crashed into a towering elm tree right beside him. He fell to the ground in fear and trembling. Then he heard voices. “Who is this man and why does he come with violence to our peaceful people?” Rev Saul asked, “Who are you?” They said, “We are Anishinabek-people of Creator. Now get up and go to the city of Muddy Waters. There you will be told what to do.”

Those travelling with Rev. Saul stood speechless. They had heard the voices but had not seen anyone.

When Rev. Saul got up from the ground, he was in a state of confusion and bewilderment. It was as if he could not see anything. For 3 days he was in isolation, prayer and fasting, trying to discern the right way to believe, the right way to go.

In Muddy Waters there was an elder- a wise one named Brown Otter Woman. Creator spoke and said, “Go to the house of the one named Funk and ask to see Rev. Saul, for he is praying and fasting. In a vision he has seen an Indigenous elder come to sit with him, and drink tea with him and to guide him in his journey.

“Creator”, said Brown Otter Woman. “This is a hard journey you send me on. I have heard of the Rev. Saul. He has encouraged missionaries to take our children. He will not allow us to use our medicines. He comes with authority to coerce and convert us from the way of you, Creator.”

But Creator said to Brown Otter Woman, “Go without fear. This man is the one that will change the hearts of the Christian ones. He can teach them that they are your relations, and how to live with respect and without fear. Don’t worry, he’ll see the truth of things. Yes, it will hurt him – but he won’t take it out on you.”

So, Brown Otter Woman went to the house of Funk and entered it. She sat quietly at the table with Rev Saul and sipped the sweet dark tea slowly. After a long time of silence, she said, “Saul, Creator has sent me to sit with you and to listen to your confusion and to guide you in the teachings of Creator.”

After several hours and many cups of tea, it was as if scales fell from Rev. Saul’s eyes and mind. He got up and shook Brown Otter’s hand. They ate together some bannock and meat stew.

Rev. Saul stayed for several days in Muddy Waters. He began to acknowledge the people of the land where he stayed. He kept his own beliefs but also spent much time in listening and learning from the ones who know Creator.