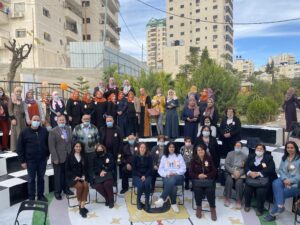 Wi'am staff and workshop participants meet in Bethany in early December 2020 for the campaign against sexual harassment, part of Wi'am's 16 Days of Activism to Eliminate Violence Against Women and Girls.

Wi'am staff and workshop participants meet in Bethany in early December 2020 for the campaign against sexual harassment, part of Wi'am's 16 Days of Activism to Eliminate Violence Against Women and Girls.

In the late fall of 2019, I was part of the KAIROS Church Leaders’ Delegation to Israel/Palestine.  This was, as one of our delegates, Rosalyn Elm, put it “Not your Grandmother’s pilgrimage”!  Hosted by Wi’am: the Palestinian Conflict Transformation Centre in Bethlehem, we saw the holy sites, yes, but much more than that we listened to and walked beside the living stones, the people of Palestine and of Israel who are working for justice and human rights. We met with church leaders, representatives from agencies, from the Canadian Embassy in Israel, and the Representative Office of Canada to the Palestinian Authority.  And we met with the resilient women of Palestine, who when asked where they found their hope, answered in unison, “God”. To coin a phrase from Zoughbi Zoughbi, founder and director of Wi’am, theirs was “a rigorous spirituality”.

We learned of their joining together to solve the problems of their communities, from water to garbage to healthcare, of their learning about their rights, increasing their participation in politics, in social enterprise endeavours which improved their families’ economic situation and reduced the chances of violence against them.

I returned home, anxious to spread the news about these amazing women and about the situations they faced.  I reread some of the books I had read to prepare for the trip. I had a meeting with my MP.  A group of us from the delegation went to Ottawa and were able to meet with some parliamentarians. I wrote two articles for our denominational newspaper, drew up a presentation with powerpoint and pictures, made up a take away of books to read and websites to check, and was able to deliver this presentation all of two times before the world was shut down by COVID19.

I thought of those living stones.  Bethlehem went into lockdown.  It is highly dependent on tourism.  80% of the people there were now unemployed. Food insecurity was rampant. And I thought of Naomi Klein’s phrase “shock doctrine”, the tactic of governments using the public’s disorientation following a collective shock to push through measures that support them and not, in this case, the Palestinian residents of the occupied territories. The settlements grew. 500,000 plus settlers are now in the West Bank. Palestinian homes continued to be demolished. The rise in domestic violence and violence in general increased rapidly the need for Wi’am’s work of conflict mediation and psycho-social support.

For the rigorous spirituality continues, thanks be to God.  A year after our trip, we were  able to meet again with our friends in Bethlehem, this time through the wonders of ZOOM and the staff at KAIROS.  The living stones told us that Bethlehem would be once again entering lockdown the next day.  And they told us of the women’s groups that were still being empowered, that were participating in politics and civil society with increasing competence.  Their voices were being heard.  They were organizing campaigns against sexual harassment.  They were training others to be trainers about gender justice, about community sustainability. They were solving water problems and holding workshops to raise awareness of the rights of women. They were not going to be stopped by COVID19.

It is a rigorous spirituality that enables the work for justice, equality and peace to continue on through the pandemic.  It is this rigorous spirituality, that, to paraphrase the prophet, Amos, let justice roll down like waters and righteousness like an ever-flowing stream.