“So much more can be done” – reflections on COP26 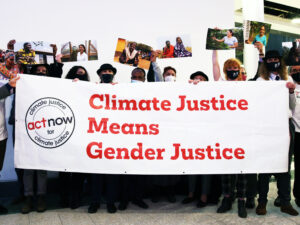 The dust may have finally settled from COP26, the UN Conference on Climate Change, which ran from October 31 to November 12 in Glasgow, Scotland, but the realities of the climate crisis continue to rage. On the final day of COP, meteorologists warned that extreme weather created by an atmospheric river was headed for British Columbia. The impact of that storm was devastating and has many wondering if international climate negotiations are keeping pace with the urgency of this crisis.

There were some notable shifts and many predictable outcomes from this year’s COP. Notably, the Glasgow Climate Pact named fossil fuels for the first time ever in a final decision statement. As always, several promises were made by world leaders over the course of the conference. Some of the commitments made by the federal government were long overdue and welcomed, such as Canada’s commitment to ending oil and gas financing abroad, capping emissions on the oil and gas sector, and pledging to end the use of coal power.

While these are positive steps, we know these commitments are not enough. Following through on all existing promises and pledges still gets us to 2.4°C of warming. Canada may have committed to ending finance for oil and gas abroad but made no such commitment for domestic financing, which totaled at least $18 billion in 2020 alone. The Glasgow Climate Pact did focus on phasing out coal-based energy and fossil fuel subsidies, but the language was weakened significantly to the extent that it will have little  impact. This was due primarily to the fact that the fossil fuel delegation was the largest ever at this COP meeting. Corporate interests continue to assert significant power over global climate negotiations.

As COP26 unfolded, partners on the ground land defenders, civil society organizations and climate change activists around the world found themselves further excluded from conversations and decision-making on matters that impact their futures and livelihoods.

While the climate crisis was described as a global emergency, little attention was given to Indigenous and Global South voices who had previously warned that failure to center local communities and activists’ concerns and solutions would seriously hamper efforts to tackle the growing planetary emergency.

Any pledges made at COP26 to put Indigenous rights at the center of climate change policy or to support Indigenous communities rang hollow, as Indigenous peoples around the world continued to be criminalized and subject to violence for defending their rights and speaking out on climate change. Indigenous land defenders at COP26 were kettled by police while protesting on the streets of Glasgow while land defenders in Wet’suwet’en territory were and continue to be subjected to police violence and criminalization for their resistance to the Coastal GasLink pipeline.

Global South partners had urgent demands and hope for change prior to the COP26 conference. Not only were they claiming their historical and ecological debts, but they also pointed out that repackaging solutions on the global stage to reinvent the wheel would only impede the local efforts of communities who cannot wait.

Despite contributing little to the climate crisis, many countries of the Global South are left bearing the brunt with insufficient resources to adapt. During the KAIROS Gathering: 20 years of spirited action for justice in late October, our partners from the Democratic Republic of the Congo and Madagascar shared that local communities are more vulnerable than ever due to their dependency on natural resources. They are constantly at risk of pollution, droughts, displacement, and gender-based violence. Climate change funding however does not reach these communities; for example, only 26 percent of funding for climate change mitigation and adaptation reached Africa between 2016 and 2019.

This situation is particularly alarming for women and young girls. Climate-related events will prevent at least 4 million girls in lower-income countries from completing their education in 2021. It is more crucial than ever for the international community to ensure that international and national policies for climate change adaptation respond to the urgent needs of Indigenous and local communities in the Global South and are financed in a way that respects the participation of women. Policies must integrate the Women, Peace and Security agenda, addressing the intersection of gender, peace and the environment and broadening the approach to security to include environmental security.

Despite being a collective responsibility, individual governments must also take concrete and targeted actions to both limit their emissions and commit to deconstruct their colonial approach to climate change locally and in the Global South. For Canada, this requires greater action to address the gendered impacts of resource extraction caused by its mining companies abroad. It also means upholding Indigenous sovereignty and jurisdiction on unceded lands and respecting Indigenous law and governance of their territories. So much more can be done.