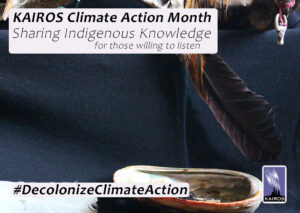 For numerous generations, Indigenous peoples have had unique, respectful and sacred ties to the land that sustained them. They do not claim ownership of Mother Earth, but rather, declare a sense of stewardship towards the land and all of its beings who inhabit it. This sense of responsibility towards the land is more than a mental or even emotional obligation; it is tied fundamentally to Spirit. A strong communion with the spirit of all aspects of the Earth provides a unique lens through which all activities of daily life become an expression of Spirit.

Indigenous knowledge is strongly linked to our natural world: languages, cultural practices, and traditions are all closely connected to the Earth, she is our Mother. Traditionally, Indigenous peoples see their relationship with each other and with the Earth as an interconnected web of life, which manifests as a complex ecosystem of relationships.

Balance and complete harmony are essential views of this knowledge and subsequent cultural practices.

Deeply rooted too is a keen belief in both adaptability and change, but change that further promotes balance and harmony, not change that creates distress, death, and the depletion of the Earth’s populations and resources. Careful observation of the seasons and the cycles of life foster an appreciation for the transience of things, including humans, as well as the interdependence that all life forms have with each other.

A relatively recent, evolving interest in Indigenous knowledge by mainstream society was seen by Indigenous seers long ago. To Indigenous people, this peaked interest is both timely and was to be expected. The deep seeded, sophisticated knowledge of how-to live-in balance with other people and all of the Earth’s inhabitants, and the very planet, herself is keenly necessary for our future generations. For Indigenous peoples, decisions are not taken lightly, since they are made with respect to the seven generations preceding us and the seven generations to come.

Many Indigenous Elders have thought that if the colonizing peoples had paid attention to Indigenous knowledge when they first arrived on Turtle Island and the Indigenous lands around the globe, the current world would be much more harmonious, clean, and healthy. Now that some people are willing to listen, after decades of land mismanagement, pollution, greed, and serious depletion of animal, plant and other sources of sustenance, some keepers of Indigenous knowledge are now willing to share their knowledge. One of the Indigenous truths is to share. Indigenous peoples have chosen to share their stories, teachings, practices, linguistic references and maps so that the knowledge and the wisdom that hasvesustained them, could be understood and used by others if they choose to listen.

As Indigenous peoples have adapted to change so must mainstream society.

By Connor Sarazin, KAIROS Blanket Exercise Communications & Partnerships Coordinator. Connor is a member of the Algonquins of Pikwàkanagàn First Nation