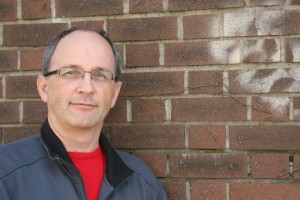 KAIROS is deeply saddened by the passing of our dear friend and colleague John Mihevc.

John was a loving husband and father, faithful friend, persistent advocate, insightful theologian, and supportive manager. His commitment to social and ecological justice ran deep, rooted in his Catholic upbringing, his faith commitments, formative experiences in Botswana, and his relationships with marginalized communities around the world.

John served the Canadian churches in ecumenical social justice for almost 25 years. Most recently, he managed the Sustainability Team at KAIROS, working with staff to express the organization’s commitments to ecological justice on issues such as climate change and resource extraction.

“His whole life was preparation for, or expression of, this deep vocation to ecumenical justice,” says KAIROS’ Executive Director, Jennifer Henry, who began working with John in the early 1990s.

Born and raised in Toronto, John began his career teaching in Botswana. After earning his Ph.D. in Theology from the University of St. Michael’s College, he volunteered and later worked for the Inter-Church Coalition on Africa (ICCAF) as its Economic Justice Coordinator. During his time with ICCAF, John became one of the global church’s foremost experts on economic justice and the African continent, particularly on the impacts of structural adjustment programs and World Bank and IMF policies.

Recently asked about one of the highlights of his career, John recalled a very early project called To Be a Woman, in which he worked with Omega Bula, then at the All Africa Conference of Churches. The project included a video and training manual that focused on structural adjustment policies and their impact on women. He spoke of the privilege of working in a supportive way in the project led by Omega that was on something so important to the daily lives of women.

John was deeply committed to cross-coalition collaboration and played a pivotal role in many such “big picture” initiatives. Highlights include coordinating the churches’ and NGO’s Africa-specific response to the Canadian Foreign Policy Review (1993-1995), which included a submission to the Parliamentary sub-committee; helping to coordinate the church coalitions’ plans for the 1995 G7 Summit in Halifax; and, serving on the coordinating committee of Building a Moral Economy: Faith and Justice Training Project, which conducted economic justice and faith workshops in over 20 communities across Canada from 1996 to 1998.

John gave significant leadership to the Canadian Ecumenical Jubilee Initiative (CEJI) (1998-2001), serving on the steering, debt campaign, and theology committees, and playing a key role in editing the Initiative’s books of theological reflection. He was passionate about Jubilee and proud of the policy gains in debt cancellation to which this theologically grounded initiative contributed.

John’s passion for bringing coalitions and partners together continued during his time with KAIROS. He gave leadership to the 2007 Dirty Waters cross-Canada tour at the time of the national roundtable process on corporate responsibility. He also spearheaded international partnership engagement during the 2007 G20 Summit in Toronto.

John is remembered for his extraordinary skills in bringing disparate and seemingly uncoordinated elements together. His relationships were strong and widespread, which contributed to the success of his endeavours. John’s quiet demeanor belied a strong determination that also served the work. During Dirty Waters, John brought six global partners to participate in the tour. Committed to ensuring that their voices were heard regarding the impacts of the extractive sector, John’s advocacy made it possible for them to participate in the government roundtable, despite initial objections from federal officials.

“John’s leadership was calm, committed and empowering. He never lost sight of our advocacy objective to ensure partners were central to the roundtable process,” recalls Rachel Warden, KAIROS’ Latin America Partnerships Coordinator. “I heard that KAIROS was credited for getting the government to finally agree to allow partners and impacted communities to participate directly in the process.”

John represented the churches in many key Canadian and global economic justice networks, including chairing the Coordinating Committee of the Halifax Initiative, a coalition of Canadian environmental and social justice organizations created with the goal of reforming the Bretton Woods institutions.

A talented writer and editor, John penned many articles on structural adjustment in Africa. He authored The Market Tells Them So: The World Bank and Economic Fundamentalism in Africa, and co-authored and edited Toward a Moral Economy: Responses to Poverty in the North and South.

John’s commitment to ecumenical social justice also led him to bring his considerable skills and persistence to bear on many elements, including the KAIROS infrastructure. Whether it was facilitating renovations, building information technology capacity, human resource development, or fundraising, John cared about strengthening KAIROS in every way possible, so as to strengthen the work of justice.

John was deeply connected and committed to his family. Music was an important part of his life. He played in a band in high school, and later in life decided to rekindle his interest in the guitar, finding time to take lessons. KAIROS staff fondly recall the Christmas party when he and his family brought instruments and entertained everyone with Christmas music. John would often sing with his colleagues when on the road. One of his last public outings was to perform at an Irish pub.

John died peacefully at home from cancer on December 21, 2014, surrounded by his loving family, and a broader community of care that reached out across the world. He is survived by his wife, Rebecca and two daughters, Stella and Sophie. John will be deeply missed by his friends at KAIROS, and faith and justice colleagues in Canada and around the world who will carry his legacy forward. John Mihevc, Presente.