Raising her voice: KAIROS calls on Canada to include grassroots women’s organizations in peace building policies and practice 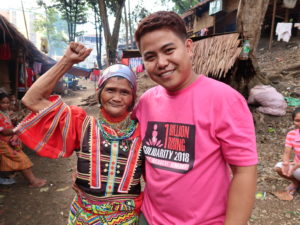 This article was written by Kirsten Van Houten, Global Partnerships Coordinator @Kirsten Explores and Rachel Warden Partnerships Manager, KAIROS Canada @kairoscanada and published as a part of #WPSAdvice series on Oct. 6 on Women, Peace and Security-Network.

A recent visit with our partners in the Philippines highlighted the important roles that grassroots women are playing in defending human rights and supporting peace processes in the Philippines.  It also made brutally clear the significant risk and personal cost of this work.

In Manila, we met with women lawyers who play an active role in protecting the rights of the poor amid the Duterte government’s War on Drugs. The Philippine government has acknowledged at least 6,600 deaths in the anti-drug campaign since 2016, but human rights groups believe the death toll is much higher.

In fact, the Philippines’s Human Rights Commission has estimated the number could exceed 27,000 and pointed out that victims come mostly from urban poor communities. These lawyers and their colleagues play an important role in supporting the families of the deceased through legal and psychosocial support. They also offer legal support to individuals facing trumped-up drug charges arising from rigorous arrest targets set by the regime.

In Baguio in the Cordillera Autonomous Region, we were introduced to women’s human rights defenders who, through their defense of land rights, are countering increasing militarization of their territories. They also play an important role in educating members of their communities about human rights and again offer legal and psychosocial support when those rights are violated.

These women, and their male allies, conduct their work at great personal risk. Over the last year, five of the members of our partner organisation Innabuyog faced arbitrary arrest and detention because of their human rights work. Further, an American citizen and journalist, Brandon Lee, was critically injured in an assassination attempt that was witnessed by his eight-year-old daughter. This assault stemmed directly from his human rights education work with the Ifugao peasants’ movement.

In Mindanao we met with members of Lumad (Indigenous) communities who have been displaced by ongoing armed violence and militarization. Even in crowed evacuation camps, women have organized to protect the well-being of their children and communities and are struggling to preserve an education system that is based on Indigenous knowledge and relationship with territory. As Indigenous land and life defenders, they are calling for respect for Indigenous rights, a resumption of all peace processes and an end to Marshal law.

Women-led grassroots organizations are laying the foundations for sustainable peace in the world’s most volatile regions. Despite enduring violence in conflict and post-conflict periods as a strategy of war, women and women’s organizations play key roles in conflict prevention and resolution, as well as in building and sustaining inclusive and just peace. Yet, they undertake this work at great risk. Women human rights defenders and peacebuilders are criminalized and even killed.

This critical role of women in peacebuilding is increasingly being recognized by the United Nations and more recently in Canadian foreign policy. This has been asserted through the Canadian National Action Plan on Women, Peace and Security and its Feminist International Assistance Policy. The important role that women play in truth and reconciliation within Indigenous communities is also increasingly being recognized in Canada and internationally. Furthermore, Canada has re-asserted its commitment to protecting human rights defenders in its recently updated guidelines – Voices at Risk which now include specific guidelines related to women and Indigenous human rights defenders.

The Women, Peace and Security Agenda has emerged out of a series of United Nations Security Council Resolutions, including UNSCR 1325 (2000), which protect women from sexual and gender-based violence in times of war and recognize the important contributions that they play in building and sustaining an inclusive and just peace.

Peace agreements have a 35 percent greater chance of lasting at least 15 years when women help draft them than when they do not, according to Inclusive Security and Peaceful Societies. Yet, only five percent of international funds dedicated to peace and security is allocated to equality between women and men or the empowerment of women in these processes.

The participation and inclusion of grassroots women is especially important because they increase the diversity of women’s voices that are heard through these processes and are more likely to include the voices of historically marginalized groups. The KAIROS Women of Courage: Women, Peace and Security Program empowers women human rights defenders and women’s rights organizations to participate effectively in peacebuilding, reconciliation and human rights processes at all levels in Colombia, the Democratic Republic of the Congo, the Philippines, South Sudan and the West Bank.

Canada has taken important steps towards becoming a global leader in supporting gender equality and women’s effective participation peacebuilding. There is also increasing recognition of the critical role of Indigenous women in peace and reconciliation processes in the final report of the Truth and Reconciliation Commission of Canada and in the final report of the National Inquiry into Mission and Murdered Indigenous women and Girls.

Yet, Canada must do more to implement these policies.

Based on our recent experiences and testimonies we heard in the Philippines, we present five steps that the Government of Canada can take to promote and protect the inclusion of  diverse women’s voices in international peacebuilding efforts.

The next government should seek to build on these gains and take efforts to fully fund and implement its Feminist International Assistance Policy. Canada’s official development assistance accounts for only 0.26 percent of the country’s gross national income, well below, the 0.7 target set by the Organisation for Economic Cooperation and Development in 1970 and reaffirmed more recently by the United Nations General Assembly.

2. Ensure that grassroots women peacebuilders are integrated into peacebuilding efforts that are supported under Canada’s international assistance policy.

KAIROS also wants to ensure that efforts to support women’s participation in peacebuilding efforts, especially at the grassroots level, are sustainable and fully funded as part of a robust international assistance policy. The next government should be sure to integrate the voices of grassroots women peacebuilders in their policy and practice.

3. Elevate the voices of Indigenous women in peace and reconciliation in Canada and internationally.

Our experience in the Philippines highlighted the discrimination and marginalization that Indigenous women face around the world, as well as in Canada. Full integration of Indigenous women into Canada’s own Truth and Reconciliation process and their protection from systemic violence remain a challenge. Canada must play a role in elevating the voices of Indigenous women in peace and reconciliation processes in Canada, in the Philippines and internationally. This should be undertaken by working to end systemic violence against Indigenous women, starting with the implementation of all 213 calls for justice in the Final Report of National Inquiry into MMIWG.

The next government should increase its core and programme-based financial support to grassroots women’s peacebuilding organisations such as those engaged in the Women of Courage program. This financing provides integral support to these organisations and facilitates their ability to persist in challenging contexts.

Canada must continue to protect the lives and work of women human rights defenders in conflict-affected contexts through the consistent implementation of Voices at Risk: Canada’s Guidelines on Supporting Human Rights Defendersand implementation of the recommendations in Raising her Voice: Confronting the Unique Challenges Facing Women Human Rights Defenders, published by the Sub-Committee on International Human Rights of the Foreign Affairs Committee of the House of Commons in June 2019. The report calls for the Government of Canada to create a comprehensive action plan to protect women human rights defenders, and to support their work.

Please note that the views in these blog posts are those of the authors and may not represent the views of all members of the WPSN-C.