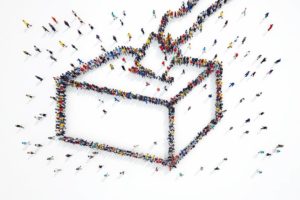 Canadians have elected a minority government. Collaboration is critical for the survival of Canada’s 43rd Parliament and is urgently needed to appropriately address mounting and systemic issues.

Indigenous rights and wellbeing, the climate crisis, migrant justice, and support and protection for women peace builders and human rights defenders are pressing issues that are not going away. Action is required now more than ever.

KAIROS urges all elected officials to work together to address these matters and recognize where and how they intersect.

Now is the time to collaborate for human rights and ecological justice, for radical welcome, and for truth towards reconciliation!

More than 60 percent of Canadians voted for parties with a concrete plan for climate action. A minority government presents a unique opportunity for collaboration. Through the ballot box, Canadians have made it clear that they expect to see effective environmental policies that address the climate emergency.

The Intergovernmental Panel on Climate Change recommends that the global temperature increase be kept below 1.5 degrees Celsius, but Canada is on track to miss the 2020 national targets detailed in the 2015 Paris Agreement. Implementing a national price on carbon was an excellent first step towards meeting these targets, but the price must increase annually until at least 2030 in order to have a real impact.

KAIROS encourages the new government to collaborate with other parties to invest heavily in a just transition. This will mean eliminating subsidies for fossil fuel companies and creating sustainable jobs and providing training for workers looking for employment in the clean energy sector.

Genuine ecological justice must also contribute to reconciliation with Indigenous peoples. The new government needs to commit to confronting environmental racism head-on, including by ensuring that First Nations communities have reliable access to safe drinking water.

Women-led grassroots organizations are laying the foundations for sustainable peace in the world’s most volatile regions. Women and women’s organizations play key roles in conflict prevention and resolution, as well as in building and sustaining an inclusive and just peace.

Fully funding FIAP and other WPS commitments means allocating more of the federal budget to achieve the policy goals. This would help move Canada towards dedicating 0.7 percent of its Gross National Income to Official Development Assistance, a target set by the Organisation for Economic Cooperation and Development for the members of its Development Assistance Committee. Among Committee members, Canada’s contribution remains among the lowest.

KAIROS also calls on the Canadian government to ensure the sustained participation of grassroots women’s peacebuilding organisations in policy development and peacebuilding processes through consultation, dialogue and solidarity actions.

There is an urgent need for work in the area of corporate accountability, both abroad and in Canada. KAIROS urges the government to reassess the mandate of the Canadian Ombudsperson for Responsible Business Enterprise to ensure it has the power to investigate the Canadian corporate sector, including their subsidiaries, for alleged human rights and environmental abuses at their overseas operations. To be a global leader in corporate accountability, the Government of Canada must not only have an Ombusperson, but must also pass legislation that requires Canadian companies to abide by local, national, and international human rights and environmental laws. Such legislation must include a fair and transparent regulatory process that imposes strict legal, financial, and political consequences for companies found to have to be involved in environmental and human rights abuses.

Indigenous women across the globe are often the targets of smear campaigns, harassment, and assassination attempts for being leaders in the defense of territory in the face of large-scale resource extraction projects. KAIROS calls on the government to adopt the guidelines and recommendations of reports such as Voices at Risk: Canada’s Guidelines on Supporting Human Rights Defenders, and Raising her Voice: Confronting the Unique Challenges Facing Women Human Rights Defenders, and othersthat recognize the leadership of Indigenous women human rights defenders and the importance of safeguarding their well-being.

As well, it is essential that the government implement the Calls for Justice for extractive and development industries in Reclaiming Power and Place: The Final Report of the National Inquiry into Missing and Murdered Indigenous Women and Girls.

The week of the 2019 federal election also marked the birthday of Jordan River Anderson, the child who inspired Jordan’s Principle. KAIROS hopes this serves as a reminder to the new government that it has an opportunity to renew and strengthen its initiatives towards reconciliation with Indigenous peoples.

In the last Parliament, the House of Commons passed Bill C-262, an Act to ensure that the laws of Canada are in harmony with the UN Declaration on the Rights of Indigenous Peoples. Due to delay tactics by a few Senators, the bill died on the order paper when the writ was dropped in September. The Act would have established a legislative framework for the UN Declaration’s implementation. The government promised that if re-elected it would reintroduce the Act as a government bill. KAIROS reminds the new government of its responsibility to make good on its promise to ensure that Canadian legal systems are in line with international human rights law.

KAIROS also presses the new government to implement both the Truth and Reconciliation Commission of Canada’s 94 Calls to Action, issued in 2015 to help redress the legacy of Residential Schools and advance the process of Canadian reconciliation, and the recently released Calls for Justice of the National Inquiry into missing and murdered Indigenous women and girls.

In addition, the government must prioritize reconciliation through direct policy. On September 6, the Canadian Human Rights Tribunal ordered the federal government to pay $40,000 for each child taken from homes and communities under the on-reserve child welfare system from 2006. In response, the Attorney General of Canada filed an application for judicial review and a stay of the ruling on the basis that there is no on-going discrimination with Canada’s funding for child and family services on-reserve. This decision goes against fact, and both the efforts and spirit of reconciliation. The new government must withdraw the application for judicial review.

By implementing the UN Declaration, fulfilling the 94 Calls to Action, and responding effectively to the Calls for Justice, the new federal government will be on a firmer path towards right relations with Indigenous peoples. KAIROS will continue to urge the government to engage with Indigenous communities and take responsibility for resetting the relationship.

KAIROS looks forward to a sustained and strengthened collaboration with the government in improving temporary foreign workers’ rights and expanding the pathway to permanent residency.

KAIROS acknowledges the positive changes in the Immigration and Refugee Protection Act and the Temporary Foreign Worker Program to benefit foreign nationals who work in Canada as temporary foreign workers. These changes include the ability of workers to move from an abusive work environment through access to the Open Work Permit for Vulnerable Workers; two Caregiver Pilot Programs that allow Caregivers to bring their spouses and children with them; a smooth transition to permanent residency after completing the required 24 months of continuous work; and the introduction of the Agriculture Immigration Pilot Program that offers opportunities for temporary foreign workers in the agriculture/farm industry to apply for permanent residency.

While we anticipate some challenges and barriers as migrant workers begin to access and benefit from these changes, we hope that the government’s openness to listen and engage in dialogue and policy reform continues to ensure that the immigration system is responsive, equitable and more welcoming.

KAIROS urges the government to consider ending temporary migration programs and returning to permanent immigration as a strategy to build Canada as an inclusive and just society.