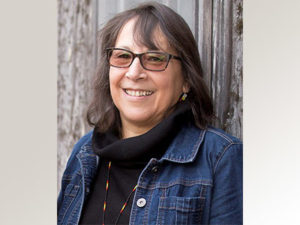 A conversation with Dr. Sherry Pictou

KAIROS has launched an online hub to connect and help further empower women land and water defenders in Canada and worldwide. Called Mother Earth and Resource Extraction– or MERE Hub, the resource was developed in consultation with women at the forefront of environmental protection.

MERE Hub is one component of a SSHRC Partnership Engage Grant awarded to KAIROS and Dr. Sherry Pictou, Assistant Professor of Women’s Studies at Mount Saint Vincent University. Dr. Pictou is a Mi’kmaw woman from L’sɨtkuk (water cuts through high rocks), known as Bear River First Nation, Nova Scotia. She is an inaugural fellow at Yellowhead Institute at Ryerson University.

KAIROS – Tell us about the work of Indigenous women land defenders in the Atlantic region.

SP – I haven’t been directly involved, but I’ve been involved with the same actors on the frontlines in Nova Scotia and New Brunswick for some time now in different organizations or Indigenous gatherings.

I’ve been looking for ways to support these women. The MERE Hub was an excellent way to do that. I was concerned that Indigenous grandmothers protesting mines and pipelines, among other multiple assaults on their ancestral homelands—their voices were not being heard. How can we elevate those voices and those issues here in the Atlantic region?

It’s so important because there’s formal negotiations across Canada, between the state and Indigenous leadership, and gender is not always taken seriously in those negotiations if at all. The MERE Hub is so important because though the context may be different in terms of countries and regions there seems to be a common denominator in terms of the assault on Indigenous ancestral homelands.

I worked with KAIROS over the last year and a half or so to put it together and I am so excited that it is finally coming together.

SP – Often, consultation stops at the leadership. There is a duty to consult with Indigenous peoples, but there is no mechanism to reach out to the broader grassroots people. What happens often when protesting a project is a threat to a people’s source of livelihood, food or water source, the people find out that their leaders may have been inadvertently or directly engaged in consultation with the company or government and this is considered consent.

One of the strong recommendations that came out of the MMIWG final inquiry report on June 3, 2019, is that women, girls and gender diverse people have to be involved in the governance and decision-making process.

KAIROS – Why are the views of Indigenous women so important in this process?

SP – In Canada and around the world there is a big emphasis to include gender or do a gender-based analysis (regarding gender equality). Well what does that mean? Why would women want to be included in a system that is obviously still misogynistic?

What we tend to forget is that hetero-patriarchy came with colonialism. And so from day one, Indigenous women have been erased from existence. When you look at the Indian Act, how we lost our status and so forth. We had all this legislation that really undermines and demeans Indigenous women. I think we’ve internalized colonialism to a degree that there seems to be this hyper neo-Liberal approach to implementing Indigenous rights and that approach is very male dominated.

Indigenous rights are being commodified under the guise of economic development as contributing to overall wellbeing – which is not the case. The resource extraction industry is predominately male operated. We know that more Indigenous organizations are also still male dominated, so Indigenous women find themselves in this precarious situation of having to not only navigate the non-Indigenous world views, particularly neo-Liberal view, but also with our own leadership who has internalized this view.

We have become so vulnerable that people are desperate for any job.

KAIROS – From the perspective of Indigenous women land and water defenders, what is wellbeing?

SP – This is such a multi-dynamic and complex question. We tend to criminalize land defense under Canadian law. The security, military, police or security guards of companies are all to protect the corporate world. What we don’t pay enough attention to is why women are defending the land and water? And sometimes a lot of the criminalization of their actions is under the guise of safety.

Why would Indigenous women put their lives on the frontlines? This is a fundamental question that we have to ask.

Indigenous women have never benefited from this colonized system. Just a few weeks ago the final traces of gender-based discrimination were removed from the Indian Act. We’re talking, this took from 1876 to 2019. Think about that.

Indigenous women know the importance of the food and water, and many of them are involved in ceremony and this is a sacredness or resurgence of Indigenous knowledge practices that have been fundamental not only to human-to-human relationships but human-to-nonhuman relationships. This does not get focused on enough. We look at jobs, the economy and so-forth, but what is our relationship to the wildlife or to all women within our land and water systems? Even within my own research on what Treaty might mean to my own people, my own community, it is fundamentally human to be in connection with the land.

KAIROS – What prompted you to help develop the MERE Hub?

SP – Gabriela Jiménez (KAIROS’ Latin America Partnerships Coordinator) and I had several exchanges back and forth and ideas of what to do. I knew KAIROS had the expertise in gendered impacts of resource extraction and it just seemed like a good way to connect here with the rest of Canada and globally.

KAIROS – What are your hopes for the MERE Hub?

SP – Number one is witness. It’s a testimonial to Indigenous women’s existence, to their stories that often get missed, and I think it’s very important. Number two is connection in terms of the interrelationship between the North and South and North and North. Northern communities in Canada are so different from Southern Canada. And, in the Global South, Canadian mining companies have violated the rights of Indigenous women and in other parts of the world.

The Hub’s information sharing and learning will really call into question the whole global economy and how important it is to be at international tables and call your own country into question in terms of what they are doing around the world.

There are different contexts around the globe but there seems to be a systematic assault on women with the hyper increased criminalization of Indigenous women. In the past year we’ve had three grandmothers from the Alton Gas site arrested, we’ve had Kanahus Manuel who is well known with the Tiny House Warriors, violently arrested in BC.

So my hopes for the Hub involve those three main things: the witnessing, sharing of experiences, and to call government policies to question.

KAIROS – With the recent MMIWG report – are we at a place where the government is starting to listen?

SP – I think we are but we have to be very careful. My biggest criticism of the election process was that this report, which just came out, wasn’t anywhere on anybody’s agenda, even amongst our own Indigenous male leadership.

The caution that I have is that the report is going to be relegated again as a social deficit with a focus on lifestyles. And although those are important recommendations in terms of better health services and so forth, they don’t look at the larger structural, gender violence and discrimination. Those violations will be perpetuated.

I think fundamentally there needs to be a structural change and this is going to be a real big challenge. Projects such as MERE Hub have to hold governments accountable. Why I say that is because in 1986, the Royal Commission on Aboriginal Peoples Report had warned about these issues, expressing concern about the violence against Indigenous women and yet here we are 2019. I know this is a very complex issue – On June 3 the MMIWG Report had come out and within three weeks, the Trans Mountain Pipeline was approved.

We really have to find out how the government is seriously going to implement those recommendations. Or is it going to become another Royal Commission on Aboriginal Peoples Report and sit on the shelf somewhere?

Gender Basis Analysis is used by the government to look at their policies to see if there’s gender inclusion. How radical will the MMIWG Report recommendations be implemented? Or will it be used, just like Treaty rights or land claim rights – and assimilated into the neo-liberal paradigm?

Feminism is always focused on equality and we have to really question what does that really mean? I think we need much more structural change – substantive change as opposed to soft change.

KAIROS – What are your top recommendations for the new government?

SP – They need to look at their policies on resource extraction both internationally and domestically and how they impact women in general and Indigenous women in particular. And they need to monitor their own contradictions. That’s not going to happen on its own. It’s going to be people on the ground that make that happen. I know that one of the recommendations from the MMIWG Report was to strike some kind of committee or formation in terms of how to address these recommendations. But immediate things can be done in terms of resource extraction. We need to make sure the policies domestically line up internationally and vice versa.

There needs to be some serious mandate behind CORE (Canadian Ombudsperson for Responsible Enterprise). I think we placed so much hope on this position, but it came back as an empty vacuum. The government appointed a person with no teeth. The government can immediately put some teeth into this position.

And the government’s Gender Basis Analysis needs to be more grounded with – as the MMIWG Inquiry did – intersectionality. How are we going to really transform the structural causes of the inequality?