The violence experienced by Indigenous women and girls in Canada is a national tragedy. We firmly believe that the Sisters In Spirit Vigils are a movement for social change.

May 2017: Manitoba is the first province to make Oct. 4 official day to honour MMIWG. Read article.

CBC News has looked into 34 cases across Canada which involve the death or disappearance of Indigenous women, but which authorities say were not due to foul play.

In every case, families of the women say they do not accept the findings of police. They suggest murder may be involved.

CBC News found evidence in many of the cases that points to suspicious circumstances that suggest further investigation is warranted.

Many advocates for missing and murdered Indigenous women say these are exactly the kinds of cases requiring further scrutiny in a national inquiry.

This project is part of CBC’s ongoing investigation into missing and murdered Indigenous women. They continue to expand their database of all unsolved cases. You can search more than 250 of these cases.

The REDress Project, focuses around the issue of missing or murdered Aboriginal women across Canada. It is an installation art project based on an aesthetic response to this critical national issue. The project seeks to collect 600 red dresses by community donation that will later be installed in public spaces throughout Winnipeg and across Canada as a visual reminder of the staggering number of women who are no longer with us. Through the installation the artist hopes to draw attention to the gendered and racialized nature of violent crimes against Aboriginal women and to evoke a presence through the marking of absence.

Jaime Black is an emerging, metis multidisciplinary artist based in Winnipeg.   For more information visit www.redressproject.org

Each year, family members, Indigenous members of the community and concerned citizens gather for a vigil on October 4th to honour the memory of missing and murdered Indigenous women and girls. Vigils take place in many communities across Canada as well as internationally. These gatherings serve to raise awareness and to provide support to families who have lost a loved one.

KAIROS fully supports these vigils. They are an important part of the journey towards truth, justice and reconciliation that is shared by Indigenous and non-Indigenous people on Turtle Island.  The vigils are organized by the  Families of Sisters in Spirit (FSIS) and Native Women’s Association of Canada (NWAC).

To find a vigil in your area, or to work with local Indigenous groups to plan a vigil visit www.nwac.ca or on Facebook.

Get your faith community and the wider community involved in listening, learning, and taking action. A vigil can take many forms, from a moment of silence, to a rally, to a community feast. All that is important is that you take some time on or around October 4th to mark the day. Let us know what you are planning so that we can help with promotion.

Join us on October 4th and throughout the year as we stand in solidarity with the families and friends of the hundreds of missing and murdered Indigenous women and girls.

We firmly believe that the October 4th Sisters In Spirit Vigils are a movement for social change. The number of Sisters in Spirit Vigils has grown from 11 in 2006 to hundreds across the country.

Walking with our Sisters

A commemorative art installation to honour the lives of missing and murdered Indigenous Women of Canada and the United States. The Women’s Memorial March is an annual event held on Valentine’s Day that originated in Vancouver’s Downtown Eastside, to call attention to missing and murdered women in the district. As of 2009, the Missing Women’s Task Force, a joint program of the Vancouver Police and the Royal Canadian Mounted Police, lists 39 women as missing from the Downtown Eastside.

The event was initiated by First Nations women in 1992, when the body of Cheryl Anne Joe was found dismembered at the corner of Powell and Salsbury streets. The march became an annual event to protest the high numbers of women missing and murdered in the community 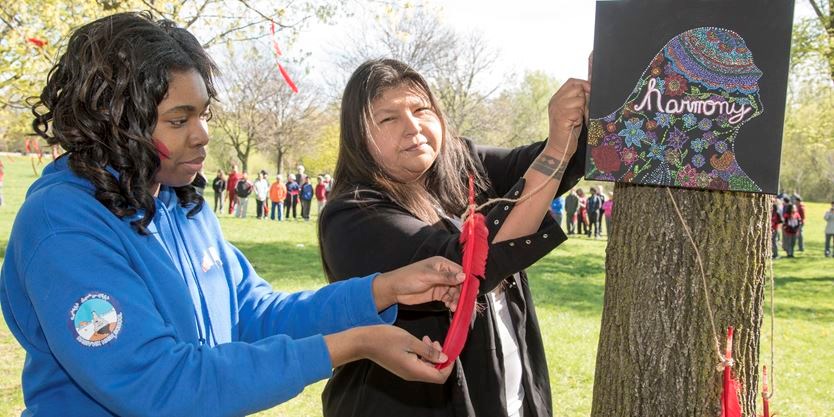 In May each year, Cardinal Leger Secondary School students commemorate missing and murdered indigenous women and girls (MMIWG) by hanging 1,200 red feathers, each marked with a name from the MMIWG list. Read article.