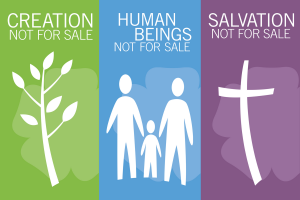 Sermon: In Truth, With Love, For Justice

I am so grateful to be here as a guest on this land, under the Dish with One Spoon Wampum Belt Covenant. I am grateful also to be a guest in this cathedral. It feels like a truly ecumenical moment when you have an Anglican, trained at a United Church theological college, who works for a ministry joyfully inclusive of Roman Catholics, preaching at Lutheran service on the Reformation, held in an Anglican Cathedral. A good day for ecumenism and I am honoured to have been asked by the planning committee.

Whether Martin Luther actually nailed his 95 theses to the door of the Castle Church in Wittenberg is contested. I really hope he did. Because, quite frankly, I love social protest with a flair for the dramatic or maybe we might just say—it was good liturgy. It was an act of public witness, a captivating image, a snap shot that in our day might go viral, as capturing the crisis of injustice, and also the possibility for transformation. The faith of a people could not be exploited for the gain of the few. God`s grace was not for sale, it was free, so extravagantly free. And dignity—living up to our identity made in the image of God—is ours as we act out of that grace.

We stand 500 years later, looking back in hindsight on a voice that tapped a collective truth and birthed a movement, many perhaps, leading to diverse expressions of a common faith—and we can say that was a kairos moment. I want to suggest that our job as disciples, energized by memories from our traditions, drawn forward in radical hope of the Gospel, is to be attuned to the kairos moments in our time—when truth speaks, love compels and justice, well, justice must be claimed but to do so with humility.

Here’s some of the snapshots-in pictures or word–that roll through my mind, in a time such as this:

These are just some of the moments in our time, when a truth that must be heard cries out.

And these brave ones act, as Luther did, out of love for that truth, but also out of a love—well here, for the land, for family, for the children, for all creation. Love compels, justice must be claimed. And we—as people, as churches, as communities—are to be witnesses to that truth, to come and be with—as midwives, accompaniers, those who walk alongside. Yes in humility, but also in determination and action towards that justice that must come.

That solidarity gives back—in new understandings, in ourselves re-formed—from colonizer to allies with Indigenous peoples, from strangers to friends, from dominators over creation to all my relations. Kairos moments re-form understandings, possibilities, and peoples.

Our biblical texts today testify to a Christian discipleship, that requires loving justice. In fact for John’s Jesus, without it, we are barely recognizable as Christ’s own: “Just as I have loved you, you should also love one another. By this everyone will know that you are my disciples, if you love one another.

We sometimes get a little confused—put love and justice, faith and works in different boxes, set them up as opposing, and yet Isaiah tells us about a God who loves us into being for acts of liberation—to open eyes, to free prisoners, to release the captives of injustice. And James speaks not of faith vs works, but a living faith animated—made real in works for those hungry and cold.

Justice, as the great Cornel West declares, “is what love looks like in public.” Justice, my friends, is just love, when you have a million people or all of creation to love.

To be disciples now, means being witness to truth tellers of our time, compelled by love to acts of justice with our day’s holy radicals. By this action we will be re-formed into the ones all will recognize as Christ’s own.

What is different, perhaps, in this time, is the need for a stature of humility. Seek justice, love kindness and walk humbly with our God. More and more aware of where we went wrong as church in mission, we must be reminded to train our eyes on the horizons of our institutions, scanning to recognize prophets less within our churches, less in the erudite and the privileged, and more in marginalized communities, whose cry out of lived experience and must be heard as truth. Our path: First, we listen, we invite others truths to shake the absoluteism of our own. We listen, with hearts wide open. The Cree word for truth is a good reminder as it means speaking from the heart. We love, and then we come alongside, responding to invitations to bring solidarity, offering and not assuming, walking with and not for, taking up and not taking over. More midwives than the ones who in God bring to birth the new thing.

We witness truth and are compelled by love to act in justice—grounded in faith and scripture—but with humility for our role in a terrible past, and for our current breaches in understanding and in action.

This humility is crucial. For example, my Puritan ancestors believed they came to this place–Turtle Island–as Isaiah’s light to the nations—that city on the hill that would be a beacon. Claiming the choseness of God, they understood their new covenant as protection—from “Indian,” from Catholic, from darkness—in return for establishing righteous community. They believed they were the light in this dark land of “heathen” and “savage.” And we know where that story ends—or it hasn’t ended—in racial superiority, in colonization, in residential schools, in genocide—all in the name of the Lord.

And not just genocide, but ecocide. My ancestors and many others saw empty land. Their colonization included the suppression of Indigenous eco- wisdom, a Western obsession with cultivation, extraction and production over wildness and balance and recovery. We who dominated the land were somehow “civilized” and “faithful,” while Indigenous ceremonies that linked all living things were somehow considered evil. Oppression of the people of the land was also subjugation of the land, with little view to creation’s inherent value. Many of our ancestor’s Bibles seem to have missed the psalm we read today about the love of God revealed in all living things. Now we face ecological crisis and seek Indigenous leadership, and wonder what went so wrong?

Over 500 years after Columbus, 500 years of Reformation, 150 years of Confederation—we know now that in many ways truth was subverted, love was warped and justice was denied—not just denied, perpetrated in Christ’s name. Our Christian faith became distorted, a tool in the strategies of conquest, dispossession, or assimilation. And so, as Christians, as churches, we appropriately commemorate historical anniversaries with declarations of our complicities.

But we also know that peoples resisted, cultures, spiritualities, languages, and nations survived and, gracefully, original welcome can still be found on Turtle Island. So, in our recognitions of colonization, and other injustices, we remember the courageous, and the resilient, those who risked to protect others, those who stood up, those who came alongside. Those who held to a living, loving justice. We also remember the land that is always a witness to harms to one another. We remember the land, and the waters that may be victim, but also that can regenerate, can rehydrate, as redemption. Creation shows us that healing is possible.

Our God was much less in the suitcase of Columbus, much more, already here, in the mighty mountains and the rivers of delight. Here and anywhere in life giving creation. Here and anywhere with oppressed peoples in their struggle. Here and anywhere when there is a graceful “in-between”—between those who would be oppressed and oppressor, between races and nations, between people and creation—across the boundaries that we—and not God—have set up along the way.

Where ever truth stirs our hearts to loving justice, our God comes alongside to strengthen and empower our action. There are many paths for a living faith.

In Canada, we must stand now—church and country—confessional, with humility—in truth, with love, for justice. And with the Berger Report, the Report of the Royal Commission on Aboriginal Peoples, with the testimony of over 7000 residential school survivors, with the indictment of the Canadian Human Rights Tribunal, with the experiences of the families of missing murdered Indigenous women and girls, with the catastrophic statistics of youth suicide, and with the final report of the Truth and Reconciliation Commission—and with the earth groaning, crying out, and say it must be now—this is the kairos moment when truth is finally heard, when it pierces through denial. When love overflows from stranger or enemy to friend, past our boundaries of privilege and discrimination, when God’s love in creation is recognized and celebrated. This is the moment when love compels us—to act with justice. This is the moment when we might be re-formed, once and again as church, from monuments of empire to a movement of the radical Gospel, the Gospel less taught, more lived.

My friend Monica is a Nisga’a woman, Nisga’a an Indigenous Nation in what is now British Columbia. She is the godmother to our child, of settler ancestry. Monica describes reconciliation as loving each other’s children as your own. And she does. This is the moment when we must compel ourselves by love into justice, for the sake of the children, for the seven generations that are to come. For a different 500 years for the people who currently live on this land, and those who arrive every day from all over the world with their hopes and dreams.

On June 2, 2015, close to 2 and half years ago, the Truth and Reconciliation Commissioners—Justice Murray Sinclair, Dr Marie Wilson, and Chief Wilton Littlechild–nailed 94 Calls to Action to the doors of the churches across this country. And yes, also to the doors of university halls, corporate headquarters, government offices, and the home of each Canadian. 94 Calls to Action to begin to redress the ravages of colonization, addressed to all Canadians. But most particular for us, nailed to every single church door, historical, suburban, in cities, on reserve, Lutheran, Roman Catholic, Presbyterian–every one. Canadian church, Canadian Christians, this is our kairos moment.

Today, tomorrow, and every day, out of a love for the truth, out of a love for all our relations, may we keep the 94 Calls to Action in clear view. On doors, altars, bulletin boards, in liturgy. May we study, pray, learn advocate and act towards the 94 as if our integrity depends on it. Because, my friends, it does.

The Commissioners–their truth, from the courage of survivors, their love, for the next seven generations, their justice, for a Canada transformed. May it be our truth, our love, our justice—together, Indigenous, settlers, newcomers. May our humble participation in the hopeful Indigenous led movement toward reconciliation re-form us to be worthy neighbours of all our relations in this beautiful land.

My friends, the Good News of that steadfast love of God is that God has created, redeemed, and is re-forming—even me, even us. When we love one another, when we make that love public in justice, the God we know as love, sees us, knows us, calls us by name, and walks with us in the streets of protest and possibility. The God of life, for whom even death is no barrier to transformation–may our God be praised, Amen.

This Reflection was presented by Jennifer Henry, Executive Director of KAIROS, as a sermon in Toronto at St James Cathedral in Toronto on October 29, 2017 in commemoration of the Reformation