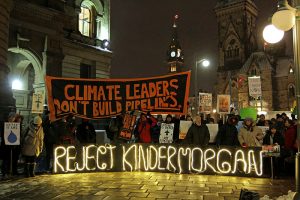 KAIROS is dismayed with the federal government’s decision to approve the expansion of the Trans Mountain pipeline, as announced by Prime Minister Trudeau on November 29. This decision is incompatible with the government’s commitment to respect and implement the UN Declaration on the Rights of Indigenous Peoples, and the Prime Minister’s promise to work towards “a renewed nation to nation relationship with Indigenous peoples, based on recognition of rights, respect, co-operation, and partnership.” It also jeopardizes Canada’s commitments to reduce greenhouse gas emissions as promised under the Paris Agreement.

The approval of the Trans Mountain expansion is a major blow to Indigenous Peoples’ right to free, prior and informed consent as established by the UN Declaration. It is the fourth project this year to be approved over the objections of the First Nations most affected. It follows an earlier decision to issue permits allowing construction of the Site C dam on the Peace River without the consent of the West Moberly and Prophet River First Nations and the decision to allow the Pacific Northwest LNG terminal to be built on Lelu Island threatening the traditional lands and waters of the Lax Kw’alaams nation.

Simultaneous with the Trans Mountain pipeline announcement, the Prime Minister announced approval of the Enbridge Line 3 replacement pipeline through Manitoba to the U.S. despite strong opposition from Indigenous peoples in that province.

The Tsleil-Waututh Nation on whose lands the Trans Mountain terminal is located has firmly rejected the pipeline’s expansion, citing it as a threat to their traditional territory and survival. As Tsleil-Waututh Chief Maureen Thomas wrote in her 25 November 2016 letter to Natural Resources Minister James Carr,

“If the Federal Cabinet directs that the Project be approved, against our informed withholding of consent … it would reopen the many wounds we have suffered as a result of the Crown’s historic disregard for our Aboriginal title and rights, including in relation to the Project’s predecessor facility… Quite frankly, such action would risk jeopardizing and irreparably harming our nation-to-nation relationship for some time to come, possibly for generations.”

Tsleil-Waututh Elder Leonard George said “If the pipeline goes through, the [Burrard] inlet will become a dead zone and that contamination will affect the Georgia Straight, the salmon run and our food source. We’re trying to save it not only for ourselves but for mankind.”

In announcing approval of the Trans Mountain pipeline, Prime Minister Trudeau said 39 First Nations signed agreements supporting the project with Kinder Morgan, the pipeline’s corporate sponsor. However, the Ministerial Panel appointed by Natural Resources Minister James Carr to consult with affected groups in the wake of widespread dissatisfaction with the project’s approval by the National Energy Board found that these agreements may not represent unconditional approval of the pipeline project.

The Ministerial Panel’s report states that “some First Nations said … they signed the benefit agreements or letters of support out of concern that, if they failed to do so, they risked getting nothing at all.” And, that during its consultations with First Nations, “many Indigenous presenters … characterized these [impact benefit] agreements as bribes, often aimed at the communities that needed them most desperately. In the words of Summer Ebringer [from the Enoch Cree First Nation], ‘It’s divide and conquer.’”

When asked how the Trans Mountain pipeline would impact climate change, the Prime Minister said the additional tar sands oil production needed to fill the expanded pipeline is within the cap on total emissions from tar sands production announced by the Government of Alberta – 100 megatonnes (Mt) of greenhouse gases (GHGs). In fact, the additional production of tar sands oil needed for the Trans Mountain expansion would add 14 to 17 Mt of GHGs annually to the atmosphere, and combustion of that oil would result in another 74 Mt of emissions per year. In addition, the upstream emissions in Canada associated with the production and processing of crude transported by Line 3 could add between 19 and 26 Mt of GHG emissions annually.

These decisions cast doubt on the federal government’s determination to help Canada make the necessary transitions to a just and sustainable economy. Rather than attending urgently to the very real issues of a just transition for affected workers, including support and retraining for a clean energy economy, decisions like Trans Mountain prolong and exacerbate fossil fuel dependency.

While we are grateful that the deeply flawed Northern Gateway pipeline project was definitively halted, we continue to be concerned that the trajectory of decisions favour the creation of more fossil fuel infrastructure despite the deep ecological impacts and strong opposition of many First Nations.

KAIROS echoes the concerns of our Indigenous partners who say these decisions perpetuate the status quo and undermine confidence in the federal government’s promise to work towards a new, rights based, nation to nation relationship.