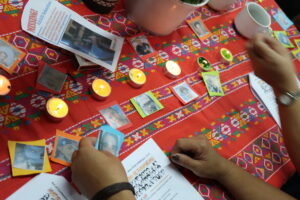 Maria Ressa, a Nobel Prize laureate and journalist, faces ongoing criminalization by the Philippines government after losing her appeal against the false conviction of cyber-libel. KAIROS joins the International Coalition for Human Rights in the Philippines (ICHRP-Canada) and numerous national and international human rights groups and advocates for journalistic freedom in expressing unwavering support for her.  We call on the Canadian Embassy in the Philippines to follow Voices at Risk guidelines, which includes providing a clear, visible presence at  court hearings in cases such as this one.

The charges against Maria are part of a pattern of criminalization and unfounded charges against human rights defenders and organizations in the Philippines, including national human rights organization Karapatan, Rural Missionaries of the Philippines (KMP) and Gabriela National Alliance of Women.  Criminalization and arrests are often followed by surveillance, death threats and even extrajudicial killings, a phenomenon that has been widely documented by independent human rights organizations such as the UN Human Rights Commission.

Civil Society groups such as ICHRP have raised concern about these human rights violations with the Canadian government on numerous occasions. Canadian officials have also had the privilege of hearing directly from Philippines human rights defenders.

On May 4, 2021, Maria Ressa and Cristina Palabay, Secretary General of Karapatan, spoke as witnesses to the Subcommittee on International Human Rights of the Standing Committee on Foreign Affairs and International Development during a briefing on the human rights situation in the Philippines. Both women faced judicial harassment and vilification after their presentation to the committee.

On July 15, ICHRP issued a statement of Solidarity on the case of Maria Ressa, Karapatan, Rural Missionaries of the Philippines and Gabriela National Alliance of Women. KAIROS fully supports the ICHRP statement which reads:

“ICHRP Canada stands in solidarity with Maria Ressa, Cristina ‘Tinay’ Palabay along with Karapatan national officers, RMP, and Gabriela in the face of these attacks. We call on the Philippine government to drop the charges and to adhere and respect the Universal Declaration of Human Rights and all major Human Rights instruments that it is a party and signatory.”

The full statement can be found here:

On July 19, following the statement, ICHRP wrote to the Canadian Ambassador to the Philippines, calling on the Canadian Embassy to provide a clear, visible presence at the court hearings of national council members of the human rights alliance, Karapatan, national officers of women’s alliance, GABRIELA, and officers of the Rural Missionaries of the Philippines. This type of accompaniment represents the application of Canada’s own guidelines on supporting human rights defenders, Voices of Risk. The letter notes:

“We strongly urge the Embassy to apply Section 3.9 of Voices at Risk which encourages Canada’s diplomats to attend court hearings of human rights defenders as ‘a clear and visible expression of Canada’s concern’ to ensure ‘detailed tracking of legal proceedings, observing whether due process is respected and ensuring up-to-date information.’ We ask that officials from Canada’s Embassy in the Philippines work with their counterparts from the embassies of the European Union, Switzerland and Belgium who have been attending the court hearings and monitoring the proceedings.”

KAIROS joins ICHRP in calling on the Canadian government to fully implement Voices at Risk in the Philippines, including Section 3.9, and to act decisively and quickly to accompany these human rights defenders who are at risk.