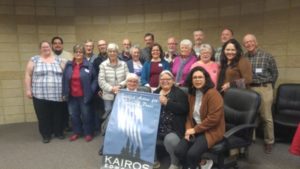 Walking Softly! was the title of the NW Ontario and Manitoba Fall Regional Gathering in Winnipeg. There were a host of Indigenous speakers discussing the impacts that colonial policies have had and still have on Indigenous land, food security, and family and family relations. Connie Sorio also broadened the conversation to a global perspective and talked about Migrants and the Land. The time was packed with the inspiration of organizing and resilience from so many different voices. “What made this Regional Gathering different from the others I’ve been to over the years was the active presence and engagement of Indigenous people (at least one-third of the people present). While there was tension and participants experiencing different levels of discomfort, I say these are all good and necessary ingredients towards building right relations between and among newcomers, settlers and Indigenous people in Canada,” said Connie Sorio, KAIROS Migrant Justice Coordinator.

The regional gathering for Great Lakes-St. Lawrence was joined with the tenth Covenant Chain Link event in Ottawa under the title nòngom kinandotam | Today We Listen, recognizing the United Nations 2019 Year of Indigenous Languages. Workshops are always a highlight at the annual Covenant Chain Link event and I know I will carry with me both what I learned about teaching languages and about making a birch bark basket in the traditional way. Another highlight were some amazing synergies at this event. On Friday night both musical groups were great and even better was hearing them sing together – which they had never done before. On Saturday, the emcee, Justin Holness, introduced the day using a story about the Reconciliation Walk in 2015. Keynote speaker Dr. Niigaanwewidam James Sinclair had a story about the very same event. They were in the same crowd picture from that day! These are just a few brief snapshots from a deep event.

Alliances for Change, the Prairies North Regional Gathering in Edmonton on Nov 22-23 was the third and final fall gathering this year. It began with the film Reserve 107 which tells the story of how the Young Chippewayan people were displaced from their land and how they have now developed mutual and supportive relationships with the settlers of that land. The panel responses to the film also spoke of relationships – in schools, in the city and across the region. The second part of the Edmonton Gathering was a new KAIROS workshop called Refuse the Medal that focuses on power, privilege and allyship. Systems of power and privilege and the actions of solidarity were key in this very relational day.

KAIROS Gatherings are always times of inspiration, building new and strengthening older relationships, and amazing unexpected synergies. Watch for opportunities to be part of one near you in 2020.