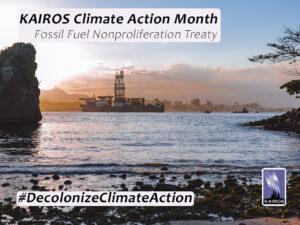 If we knew that ongoing and elevated use of something was extremely bad for us, would we continue to do it? For some, the answer is yes.  We typically call this addictive behavior.

What if we knew that increased use of something would have deadly consequences for others and not as much for ourselves? We would consider that immoral. In such cases one group may need protection against our behaviour. But what if there is a power imbalance, when we have the power to harm others with impunity?

This is increasingly the case with the proliferation of fossil fuels. Burning fossil fuels is the largest human cause of global heating amounting to approximately three-fifths of carbon emissions. Fossil fuel use is climbing, and yet countries with fossil fuel reserves continue to subsidize production and exploration.

One tool used in the global commons is a treaty. Given the scale of the problem, one treaty gaining momentum is the Fossil Fuel Non-Proliferation Treaty.

This Treaty is greatly needed. Despite climate pledges, “overall government support for fossil fuels in 51 countries worldwide almost doubled to 697.2 USD billion in 2021, from 362.4 USD billion in 2020,” according to a new report from the Organisation for Economic Co-operation and Development and the International Energy Agency.

The “carbon budget” is the maximum amount of cumulative carbon emissions that if used would result in planetary warming to a given level. The IPCC estimated that in order to meet the Paris targets, the world’s remaining carbon budget is 500 billion tonnes of carbon dioxide from 2020 onward. In the following year, approximately 80 more billion tonnes were emitted. Additional subsidies and plans for large-scale “carbon bomb” extraction projects are planned, threatening the Sustainable Development goals and our hopes for a livable biosphere.

Stopping such detonation is the intention behind the Fossil Fuel Non-Proliferation Treaty (FFNPT), modeled on the Treaty on the Non-Proliferation of Nuclear Weapons. Even the Vatican has signaled the value of the FFNPT when Canadian Cardinal Michael Czerny expanded on Pope Francis’ call for the end to industrial extraction in the mining, forestry and oil sectors. Other faith leaders, as well as cities and government officials around the world, have endorsed the Treaty. KAIROS has issued reports on a post-petroleum world for a long time.

The three pillars of a proposed Fossil Fuel Non-Proliferation Treaty are:

Would your church endorse the FFNPT? Why or why not? Consider the moral case as expressed by faith leaders. Talk about the issue with others. Advocate for endorsement by church leaders, city officials and elected politicians. These are among the ways that social change happens.

Colonialism comes in different forms. Continued profligate use and extravagant production of a substance that is causing deadly harm now is pathological. Fossil fuels cannot continue to proliferate.