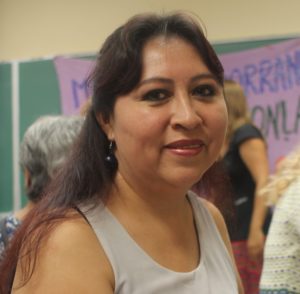 We have lost a courageous and compassionate defender of life, nature and dignity and a dear friend.

When I learned from our partner Acción Ecológica in Ecuador that Gloria Chicaiza had started her journey to the stars on the evening of December 29, I was looking at the night sky here in Toronto. Since then I have been thinking about her life and the impact that she had on everyone who had the honour of knowing her.

Later, I spent some time looking for photos of Gloria in the KAIROS files. It was a very sad and solitary exercise, but at the same time a way to remember Gloria and honour her life. She was a dear friend. I learned a lot from her, and she has had a profound impact on how I see and how I am in this world. She will always be with me.

The impact Gloria had on this world is so clearly articulated by people, the communities and organizations who worked with her in Ecuador and around the world. Below are reflections from KAIROS staff as well as messages and tributes to Gloria that I gathered from Facebook.

Gabriela Jiménez, Latin America Partnerships Coordinator, KAIROS, shares: Gloria Chicaiza cherished and flourished in being one of many. And as humble as she was, she had an uncanny ability to lead and maintain a steady and thunderous beat, a life-affirming pulse that guided, mobilized, and inspired communities and networks in the protection of Mother Earth.

She denounced all forms of violence against cuerpos-territorios.

She, like her colleagues of Acción Ecológica—sus hermanas en la lucha—defy the status quo. They even formed a bateria, an ensemble that performs batucada. What better way to enact their defiance as celebration than through a musical practice not traditionally available to women?

In a world that has deterred and frowned upon women’s roles in public life, Gloria made music out of her rebellion. She knew how to get people to listen, out in the streets of Quito, the forests of Ecuador, and in the halls of governments.

Recently, Gloria testified in front of the Government of Canada’s Subcommittee on International Human Rights of the House of Commons Standing Committee on Foreign Affairs and International Development. Her testimony informed the Subcommittee’s report on women human rights defenders, “Raising Her Voice: Confronting the Unique Challenges Facing Women Human Rights Defenders.” Referenced throughout the report, Gloria’s testimony was unequivocal on the danger women face in their defense of Mother Earth and the role the Government of Canada must play to ensure extractive companies are held accountable for environmental and human rights violations.

For all her force, or rather, because of it, she was always tierna—sweet and loving. I will remember her for her gentle soul and for her discerning ability to point out the many ways in which that other world she urged us to imagine is already perceptible, in-the-making.

Gloria’s legacy will continue to provide a heartbeat, a timeline, upon which that other world she helped make possible will be arranged.

“Cuando una amiga se va, queda un tizón encendido que no se puede apagar ni con las aguas de un río.” “When a friend goes, an ember remains one that cannot be turned off. Not even with the waters of a river.” Paraphrased from a poem by Alberto Cortez, Argentina.

I knew Gloria was sick, but still, I had hope that, somehow, she would recover. I am deeply saddened but also thankful I met her and worked with her. I’ll hang on to those memories and continue on this path to honour Gloria and the many other land and water defenders from all around Pacha Mama!

“Y tanto amor tras su paso nos dejó” *. This phrase is from a song written by a Salvadoran friend of mine in the 90s. It means something like “she left us so much love after passing through this earth-life”. That was my feeling upon learning about the passing of our sister compañera Gloria Chicaiza from Acción Ecológica in Ecuador. Her body died, not Gloria.

Last time I saw Gloria, in June 2019 when Gabriela Jiménez and I travel to Quito to work with Acción Ecológica on their version of the KAIROS Blanket Exercise, I saw a true resistance warrior giving it her all. Gloria is one of the many life teachers I have been blessed to have had. Gentle but strong. Quite clear in her understanding of the issues affecting women, Indigenous women, and the impact of cruel criminal patriarchal extractivism. Gloria is one of these people whose time came too soon. It was obvious to me she wasn’t ready to go. The body simply couldn’t sync in with Gloria’s mind and spirit. You looked her in the eyes, and you could feel the courage and strength. We hugged each other. We cried. We knew it was going to be a hard battle and it might be the last time seeing each other. She said thank you for coming. I said thank you for helping us come and having us here.

I do not want to pretend Gloria’s passing does not hurt. It does hurt a lot. But I am immensely thankful to Gloria for all the teachings. For a life lived to serve and protect the whole of creation. Because she didn’t work just with Acción Ecológica in Ecuador. She worked with many other defenders around the world. From Canada to the Philippines. Thanks for your courage Gloria. ¡Gloria ganó y hoy está en la gloria! Gloria is the glory!

Her colleagues at Acción Ecológica wrote: Our sister, friend, compañera in the struggle Gloria Chicaiza has left for the stars. A life that is an example for all of us now has a name, Gloria.

The community of Intag in Ecuador writes: Thank you Gloria Chicaiza from infinity we are sure that you will continue to support our struggle. You who continued to struggle with us despite your failing health. You will live on in the forests and the water that you defended with such courage. You will live on in our hearts.

Meeka Meka, KAIROS partner and memberof Pauktuutit: Inuit Women of Canada who travelled with Gloria to the Philippines to participate in an international conference on mining wrote: You were such a bright light and a wonderful friend. May you Rest In Peace. The world is a little less bright with your passing. Much love to your family and friends.

Natalia Atz Sunuc from Guatemala wrote when she heard the news of Gloria’s death: She has started her journey to the stars. Now, she will be received by our grandmothers who will welcome her as a strong fighter for life. She remains always present in our hearts.

Vernie Yocogan Diano of the Philippines, who organized a workshop on the gendered impacts of mining with Gloria, wrote: The cherubims and seraphims are dancing to welcome a wonderful person to the world of eternal rest. Gloria will stay eternal in the world of the living with her good works etched in people whom she touched and in written narratives about Gloria. Presente!

If you would like to contribute a reflection or photographs to this post, please email Gabriela Jiménez at gjimenez@kairoscanada.org.