Giving thanks to migrant workers, meaningfully 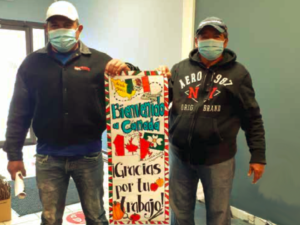 Migrant workers were welcomed by the Simcoe community at the Centre for Migrant Workers Solidarity, a partner of KAIROS’ Empowering Temporary Foreign Workers during COVID-19 project.

Migrant workers were welcomed by the Simcoe community at the Centre for Migrant Workers Solidarity, a partner of KAIROS’ Empowering Temporary Foreign Workers during COVID-19 project.

Migrant workers were very much present in Leamington when I drove through its streets one Sunday in September. It was their day off, and they were busily grocery shopping, banking and socializing.

These workers are vital to this agricultural community, located south of Windsor and home to the largest concentration of greenhouses in North America.

Later that day I saw the workers do something else. They celebrated.

The Migrant Worker Community Program hosted an event in honour of Grito de Dolores, Mexico’s Independence Day, which drew thousands of workers and their allies to relax, enjoy music and, for Mexican workers, celebrate their heritage.

Through this event, the town expressed its gratitude for the people who traveled long distances, spending months away from their families, to grow and harvest our food.

As we sit down in celebration of bounty and family, I ask all Canadians to join me in giving thanks to the workers who come to Canada to bring food to our plates, provide care to the young or vulnerable and work in other essential sectors.

Canada owes them a deep level of gratitude. Afterall, what would we do without them?

When COVID-19 forced lockdowns in Canada in the spring of 2020, we learned quickly just how important their contributions to the Canadian economy are. Farm owners appealed to the federal government to waive agricultural workers from border restrictions to avert a labour shortage during the critical planting season. As in the past, farmers struggled to find Canadians to fully fill these roles.

The pandemic has been especially hard on migrant workers. The overcrowded and often unhygienic living quarters of field workers, limited access to benefits, workplace abuses, and the dangers posed by COVID-19 have been well documented.

The federal government recently addressed some of the problems exacerbated by the pandemic by lowering eligibility requirements for EI benefits and introducing new criteria for employers to help safeguard workers’ safety.

In April, the government temporarily opened up permanent residency applications to 90,000 people, 50,000 of whom are workers in health care and other essential sectors, including agriculture. Applications close November 5 or until the limit is reached.

“Your status may be temporary, but your contributions are lasting —and we want you to stay.”

Minister of Immigration, Refugees and Citizenship

If the Canadian government is truly grateful for the lasting contributions of temporary foreign workers, it would extend permanent residency applications indefinitely, and regularize undocumented workers who have – through no fault of their own – fallen through the cracks of Canada’s cumbersome Temporary Foreign Workers Program (TFWP).

For decades, the TFWP has made it difficult for caregivers – and impossible for other foreign workers – to become permanent residents. This approach has manifested in cases of exploitation and abuse at the hands of employers and recruiters.

As workers are tied to one employer, they too often keep silent for fear of deportation. Also, the prolonged family separation caused by prohibiting spouses and children from joining workers has been deeply stressful, sometimes leading to marital breakdowns.

Recently, the federal government introduced programs to address some of these problems, including a pilot program for migrant caregivers. The program offers full permanent residence status after working in Canada for two years, and occupation-specific work permits, enabling caregivers to change jobs quickly and easily to escape abusive conditions without fear of deportation. It also allows open work permits for spouses and common-law partners, and study permits for dependent children, so that caregivers’ families may accompany them to Canada.

While many of these improvements are laudable, a sustained permanent residency application and regularization program for undocumented foreign workers will help protect them from unscrupulous employers and recruiters.

Canada has a history of administering successful regularization programs. The Adjustment of Status Program in 1973 was the largest of its kind in Canadian history, granting permanent residency status to approximately 39,000 people from more than 150 countries. The program was not sustained, however.

For decades, Canada’s essential sectors have struggled to fill their labour needs domestically. Clearly there is no temporary fix to this chronic problem.

By ending temporary migration programs and returning to permanent immigration to address labour shortages, the government will truly demonstrate gratitude to migrant workers for their contributions to Canada.