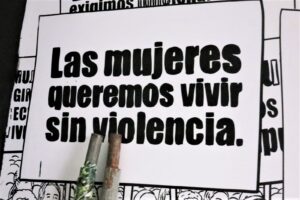 "We, women, want to live without violence." Barrancabermeja, Colombia, 2019.

"We, women, want to live without violence." Barrancabermeja, Colombia, 2019.

Among the many conclusions at the UN Commission on the Status of Women as well as figures and statistics—concrete data and real cases—on the global increase of gender-based violence experienced in the last year due to the pandemic, the specific case of Colombia continues to astonish. In Colombia femicides have increased by 175% compared to last year, with a total of 630 femicides during 2020.

Despite this reality, there is a broad, normative regulatory compendium of legislation in Colombia that purports to promote the safety of women as special constitutional subjects and that regulates gender-based violence and domestic violence. The power of the legislative branch, in terms of norms related to the protection of women appears to largely meet current needs as well as the agreement of international treaties ratified by Colombia. However, the reality of their application is something else entirely. In the implementation of these standards, women victims encounter many barriers that do not allow for the restoration of their rights or the protection of their life and personal integrity.

One of the failings of Colombia’s judicial system—in terms of the protection and defense of the rights of women victims of gender-based violence—is the revictimization that women suffer from the institutions that are meant to protect them; the objective of these institutions, which is nothing less than to protect the dignity of women and their fundamental rights against their aggressor, is not fulfilled. Officials’ obvious lack of understanding of a differential gender-based approach causes women victims to lose confidence in institutions This results in women not denouncing violence or not following through on criminal proceedings that they initiate in the face of a system that revictimizes. To this already-identified structural problem, one must also add the judicial congestion caused by a scarcity of officials who have the knowledge and training to deal with gender-based issues. This issue could be addressed if a special gender-focused jurisdiction were created to ensure compliance and effective enforcement of standards that are already in place for the protection of the fundamental rights of women victims, allowing for progress in terms of gender justice.

There are other reasons that have prevented the correct implementation of existing laws for women in Colombia. It is therefore essential that the Colombian state cease its creation of public policies or regulations that pretend to be in favour of women, when in practice these are not implemented adequately, allowing impunity against these crimes to continue to increase considerably. Until the multiple problems and deficiencies of the current judicial system are resolved, the protection and restoration of the infringed rights of women victims of gender-based violence will not be achieved, and a decline in the number of feminicides is even less likely.

Thank you for your support. Every dollar you donate to Women of Courage: Women, Peace and Security partners will generate an additional $3 in funding from Global Affairs Canada (GAC).  DONATE