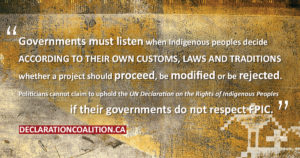 In December, in two separate letters issued under their Early-Warning Measures and Urgent Action Procedures, the United Nations Committee on the Elimination of Racial Discrimination (CERD) called on Canada to seek independent, expert advice on implementation of the right of free, prior and informed consent (FPIC).

One letter was issued in response to an ongoing First Nations legal challenge to the Site C dam, a hydro-electric megaproject in northeast British Columbia that the Committee has stated should not proceed without FPIC. The other letter concerned the federal government’s support for the Trans Mountain pipeline despite strong opposition from affected First Nations in British Columbia.

The need for a consistent and well-informed approach to FPIC implementation, however, is broader than either of these projects. This is illustrated, for example, by the high-profile police action in early January to dismantle a barricade supporting the right of the Wet’suwet’en hereditary Chiefs to say no to planned pipeline construction on their territory.

The federal government, as well as some provincial and territorial governments, have made important commitments to upholding the rights of Indigenous peoples, including the implementation of the Truth and Reconciliation’s Calls to Action and the UN Declaration on the Rights of Indigenous Peoples. Unfortunately, even with government statements affirming the right of free, prior and informed consent, respect for this right remains, at best, incomplete and uneven.

Our coalition – made up of Indigenous Nations, Indigenous peoples’ organizations, human rights groups and individual human rights advocates who have all been deeply engaged with the UN Declaration would like to draw the attention of policy-makers to the following considerations:

In conclusion, our organizations do not see FPIC as a barrier to development. Rather, it is, a crucial safeguard in international human rights law against non-Indigenous governments imposing unjust and unwarranted decisions on Indigenous peoples. The UN General Assembly has repeatedly reaffirmed by consensus Transforming Our World: The 2030 Agenda for Sustainable Development. An integral element of “sustainable development” is to “protect human rights”. Further, “no one must be left behind”, including Indigenous peoples. This is the ongoing commitment of the international community, including Canada. Effective, consistent and non-discriminatory application of FPIC is essential to that vision of sustainable development that benefits everyone.

The Coalition for the Human Rights of Indigenous Peoples (www.declarationcoalition.ca)

This statement was first posted on https://www.declarationcoalition.com/statements/

This Open Letter was endorsed by the following Nations, organizations and individuals:

BC Assembly of First Nations

Union of BC Indian Chiefs

For more information on implementation of the UN Declaration, please see our factsheets