Equality and Social Justice– no better and no worse 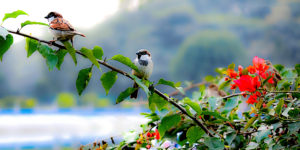 Fortunately, I did not have to attend Residential School. Since I grew up with my parents in Toronto, I absorbed their attitudes and worldviews. In spite of a great deal of denial in my family, I have been constantly identified as an “Indian” from as far back as I can remember and have had to deal with a certain amount of confusion as a result. Much of it as been defused, however, by my deeper understanding that comes with being an adult.

As a child, I did not realize that the way I saw the world was vastly different from that of my mainstream friends. I grew up with the understanding that I am no better and no worse than anything else on Mother Earth and that includes all of the animals, the birds, the plants and the people. Many of my friends had dogs or cats as pets, but they tended to see most creatures as being primitive, unintelligent and very far below human beings who were superior to everything.

When I pass a mother sparrow on the street that is feeding her clamoring young, I am reminded that the motherly instinct is shared as widely by the animals and birds as it is by human beings. Listening to sparrows chirping back and forth between birds on opposite sides of the street, further strikes me as being similar to the young human being walking in front of me who is chirping to distant friends by texting with his cell phone. Perhaps the attitudes of my parents were more accurate than I ever imagined. Perhaps all of the creatures on Mother Earth, including the people, really are equal.

Passing to the next world

As a traditional Pipe Carrier, I am often called upon by Indigenous people to do a Pipe Ceremony asking the creator to help someone who has just passed away to cross over into the next world. Mainstream adult friends tend to view such practices as being irrelevant, superstitious, misguided and even primitive. If they are right, the Indigenous view that I am no better and no worse than anything else on Mother Earth including all of the animals, the birds, the plants and the people would seem to be inaccurate, and their world views are superior to mine.

On the other hand, all animals, all birds, all plants and all people pass away sooner or later. Perhaps, we are not as different from those creatures as we tend to think. When an Indigenous person passes away, it is customary to perform an ornate ceremony asking that their footsteps be watched over as they pass through the Western Door to the next world. Admittedly, there is no guarantee that the ceremony will actually help the person move to the next world. It is guaranteed, however, that the ceremony helps the person’s friends deal with their passing.

All people can be considered equal regardless of their culture, spirituality, or community. The Catholics, the Protestants, the Buddhists, the Jews and the Muslims all have ceremonies to watch over people who are passing into the next world. While there is no guarantee that the ceremonies will help the person who has pasted, they do help those left behind.

Perhaps believing that I am no better and no worse than anything else on Mother Earth— including all of the animals, the birds, the plants and especially the people— is a very sound worldview after all, that contributes to social justice.

Dr. Robert A. Phillips/ Bob Phillips (Great Bear) is a non-Status Urban Mi’kmaq. Although a traditional Pipe Carrier, Bob is also very contemporary and holds a PhD in Indigenous Studies from Trent University. He spent ten years as host of the Aboriginal Voices Radio Arts Review show discussing art, culture and contemporary issues with community members from across Canada and the Far North.