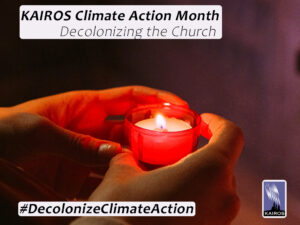 Christianity has not always been a primarily European religion and it was not always in collusion with imperial expansion. From its starting point in West Asia (Palestine), as late as the seventh century, three-quarters of the Christian believers were outside Europe – and it is so again in the twenty-first century.

Europe comprises around one-fifth of the world’s Christians now while the faith grows in Africa, Asia, and elsewhere. These people of faith bring different and culturally-relevant approaches to the practice of spirituality. Nevertheless, eurocentrism and colonialism still shape the expression of Christianity. The faith has operated as a tool of empires, and it has also directly oppressed peoples. Residential schools for Indigenous children in North American are recent examples.

Many Christians and denominations would do well to engage even further in self-analysis of this legacy. There are numerous resources to decolonize the church in order to “unravel Eurocentrism” as Marie Battiste, an Indigenous education scholar at the University of Saskatchewan states.

WHY do this decolonizing work? If you don’t, your God is too small to be the Creator of all cultures and peoples around the world. The example of decolonizing the church illustrates how deeply rooted coloniality is in our society, including climate policy.

Battiste describes colonialism in terms of “cognitive imperialism” which she says is built on knowledge forms and assumptions that privilege the languages, discourses, practices, and institutions originating in colonial European cultures.

Ask yourself, how does Christian faith and practice replicate Eurocentric ways of doing and being?

So how do we “decolonize the church?”

In his numerous books, Indigenous biblical scholar Randy Woodley critiques the Eurocentric capture of the way of Jesus. We need to “change our lens” he writes. For a solid ecological perspective, start with Shalom and the Community of Creation. From a settler perspective, Steve Heinrichs has edited several works, particularly Unsettling the Word: Biblical Experiments in Decolonization. And Sarah Augustine shows the ongoing global harm of the Doctrine of Discovery in her book and podcast. We are to follow Jesus and dismantle the Doctrine of Discovery, she insists. For a variety of articles on how one Christian tradition is struggling with these questions about decolonization, see this special issue.

There are plenty of other resources to use to expand an understanding of the Christian faith. Look up works on “Postcolonial theology.” R. S. Sugirtharajah and others have produced numerous books that consider the Bible and Empire and postcolonial analyses of scripture or write on faith and land from Indigenous, Latin American, Palestinian, African and Chinese perspectives. Learn from people who have very different perspectives on faith, honour, land, money and social institutions. Include their prayers and practices as part of liturgies. Faith can be expressed differently. Decolonization goes far beyond equity and inclusion of diversity.

Activism around social justice can accidentally create “victim narratives” that undermine the agency of people actively fighting injustices in their own communities. This is why KAIROS Climate Action Month has emphasized solidarity with Indigenous peoples and our partnering organizations around the world. Another detrimental possibility is what is called a “white saviour complex.” None of this is helpful. A critical perspective on climate has a greater impact by enriching and reframing dominant climate change and climate justice narratives.

The point is: Reconciliation needs decolonization; decolonization is liberation. The old canard is valid: “None of us is free if all of us are not free.” A Eurocentric Christianity has even reframed the Palestinian ethnicity of Jesus with numerous depictions of him as a white European.

One final thought: according to Indigenous scholar Taiaiake Alfred decolonization requires extensive political change, goes far beyond liberal reforms, and most certainly is not only about cognitive reorientation.