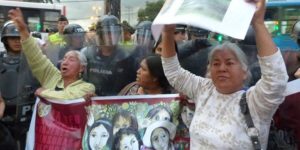 Women attend a rally on corporate accountability during COP20 in Peru in 2014. The government’s new ombudsperson for responsible business enterprise will have ‘very little’ impact for women who have experienced mining injustices.

Women attend a rally on corporate accountability during COP20 in Peru in 2014. The government’s new ombudsperson for responsible business enterprise will have ‘very little’ impact for women who have experienced mining injustices.

To address corporate misconduct, the federal government needs to truly commit to independence and power in an ombudsperson because the safety and well-being of Indigenous women are at stake.

There is an indisputable difference between claiming to be a feminist and being a feminist. One amounts to a proclamation, the other is a consistent way of life. With the recent appointment of an ombudsperson for responsible enterprise (CORE) on April 8, the Canadian government continues to epitomize the former.

Canadian companies represent approximately 60 per cent of the global extractive sector. Accountability in the extractives industry may not seem like a feminist issue. But for the women with whom Kairos partners around the globe, corporate accountability is fundamental to feminism.

For women, it is about power—wide differentials of power—between Canadian mining companies and communities in the global South, most of whom are Indigenous.

It is about consent: do communities genuinely have the power to say no, if they do not wish to engage in extractive industry projects with Canadian companies? Do the women in these communities have the right to decide what happens in their territories?

It is also about the multiple and intersecting burdens women experience. Indigenous women feel the negative social, health, and environmental impacts of corporate misconduct first and more discernibly. They face gender-based violence, which has been used, in documented cases, as an additional weapon levied against women who speak out against particular projects.

This supposed step forward was hard won, the result of decades of advocacy in Canada and abroad by civil society, Indigenous, faith and labour groups.

The office of CORE is touted as a response to a far too-common occurrence of grievous allegations of human rights and environmental abuses brought forward by communities at the site of Canadian mines, while also addressing the potential for abuse and exploitation within the garment sector.

What will be the impact of this recent announcement? For Kairos partners, women connected to communities who have experienced and have knowledge of mining injustice, the answer is “very little.”

This is because the government’s recent appointment unveiled a powerless advisory post, not dissimilar from the corporate social responsibility (CSR) counsellor position that previously existed and was abolished because it was deemed ineffective.

Lacking both independence and powers to investigate, criteria the government promised when the position was announced more than a year ago, the CORE will be of little use to communities as long as the powerful companies involved choose not to participate in investigations into community concerns.

Without independence, this position does not begin to redress the huge imbalance that communities face when trying to have violations in human rights or ecological harm recognized and addressed.

Indigenous women with first-hand and historical knowledge of the adverse impacts of corporate negligence have expressed and continue to reiterate the urgency for an independent CORE with unequivocal investigative powers.

Natalia Atz Sunuc, a Maya Kaqchikel human rights defender from Guatemala, points out how, in the case of the Marlin Mine (whose operations ceased in 2017), local communities voted against the project in referendums during the consultation process. And still, operations went ahead—violating Indigenous peoples’ right to free, prior and informed consent as stipulated by the UN Declaration on the Rights of Indigenous Peoples.

Without investigatory powers, discrepancies between community assertions of opposition and company claims of consent, cannot be genuinely interrogated through a rights-based lens.

In responding to the appointment, Beverly Longid, coordinator of the Indigenous Peoples Movement for Self-Determination and Liberation of the Philippines (IPMSDL), speaks of the failure to put “Indigenous women and their communities at the heart of development,” recalling the case of Marcopper mine.

On March 24, 1996, the tailings spill at the Canadian-owned Marcopper mine in Marinduque, Philippines discharged a torrent of toxic waste into the Boac River system. The spill caused mass devastation, including the decimation of life and habitats, the evacuation of entire villages, and the displacement of thousands. Despite evidence of criminal wrongdoing, the Marcopper Mining Corporation never faced any legal consequences.

Without powers and independence, Longid believes the CORE will do little to protect Indigenous communities, including Indigenous women, from these kinds of future impacts enacted by powerful corporations that operate with little to no accountability.

Nor will the position provide protection against what assistant professor of women’s studies at Mount Saint Vincent University, Sherry Pictou, observes are “horrendous human rights abuses, including murder and sexual violence and rape against Indigenous women in particular” filed in foreign courts.

To address corporate misconduct, the federal government needs to truly commit to independence and power in an ombudsperson. The safety and well-being of Indigenous women are at stake.

As Pictou concludes, “The link between development, particularly in the extraction industry, and violence against Indigenous women is becoming more evident.”

If this government wants to validate its feminist claims, it would champion corporate accountability and appoint an ombudsperson who is not only a woman but is independent and empowered to investigate Indigenous women’s charges brought against Canadian corporations. Isn’t that what a feminist government would do?

This article was first published on May 8 in the Hill Times.