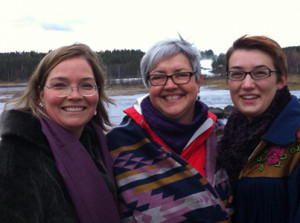 Readers are asked to show support for #MakeItOperative by:

We are being asked to take action now; to stand up for the voices of women, youth, seniors and Indigenous Peoples and to realign COP21 for the sake of justice. In this video Chief Littlechild makes the need clear in his own words:

This year, just before Canadian Thanksgiving, forty people from the global North gathered above the Arctic Circle in Storforsen, Sami Territory, Sweden, to raise-up stories of how climate change is currently impacting people in the Arctic. Why? Because Arctic climate change evidence reveals what is to come for the rest of the planet, and if climate change is not checked, the experiences of the people of the North will become common to everyone. The hope is that today’s stories of the lived impacts of climate change will move to action the 40,000 participants expected November 30, 2015 at the twenty-first UN conference on climate change, called COP21, in Paris.

The Parties to the UN climate convention have recognized how far reaching the implications of this particular November- December conference might be.  “Business leaders and investors” have been mobilizing to help draft a succinct outcome document (a protocol or agreement) that aligns with their interests.

COP21 representatives from industrialized-nations are disproportionately urban delegates living daily with mere ripples of climate change. Alternately, the Indigenous Peoples who live closer to the land are already experiencing waves of climate change and they are under-represented at COP21.  As the Thomson Reuters Foundation pointed out on Nov. 18, “The role of the world’s more than 370 million indigenous peoples in fighting climate change has been largely ignored in national plans to curb planet-warming emissions issued ahead of upcoming U.N. climate talks.”[i] Delegates to the Storforsen gathering, including Deborah Tagornak, an Inuk member of KAIROS’ Indigenous Rights Circle, shared important circumpolar information not commonly known to many COP21 attendees. They described food-chain insecurity across the Arctic: fish flesh that is sickly yellow instead of healthy pink, caribou and mammals changing migration routes due to rising air and water temperatures and shifting ice conditions, herds of reindeer starving in the pasture due to vegetation changes, deformed berries shriveling before ripening. And it’s not only that food is harder to find, it is also more hazardous to gather as travelling on the land, water and ice has become dangerously unpredictable.[ii]

In Sweden, conference delegates saw the connection between the suffering of the land and its effects on traditional livelihoods, the mental health, identity and well-being of all who live there. We were moved by the concerns youth have for their future and their cultural way of life. We heard of the ongoing dispossession of the peoples of the land from the land and acknowledged the responsibility to include peoples of the land in decision-making that affects the future of all.

At Storforsen, Christians were reminded that John 3:16 reads in the Greek that God so loved the cosmos, the whole of nature, that God sent his only beloved Son…. Not just Christians, but people of all faiths, are called to see that the spiritual roots of climate change point to a need for conversion, to repent from individual and collective patterns of consumption that put the creation and life at risk. Climate change, Indigenous rights and poverty are inseparably intertwined and must be of concern to all people today.

Climate Justice for the Arctic is indeed a spiritual issue. We heard that all the land, all the cosmos is sacred, a sacrament, infused with meaning. Each being has a purpose. Each human being has a purpose; to be a responsible caretaker.

There was a request to ask faith communities and people everywhere to rededicate themselves to stand in solidarity and support the peoples in the North, who are now already survivors and leaders in responding to climate change. There was a call to take brave action and make bold decisions on promoting climate justice. Help is needed now. How so?

The COP21 outcome document will lead to international laws and policies that will affect us all, but as TRC Commissioner Chief Wilton Littlechild pointed out in Storforsen, protections for the inclusion of the voices of women, intergenerational equity (youth and elders) and Indigenous Peoples, may get dropped from the Paris outcome document. As such, Chief Littlechild, who is also a member of the UN Expert Mechanism on the Rights of Indigenous Peoples, along with colleagues in the Arctic Caucus, the Pacific Caucus, and the Women’s Caucus, is calling for the following paragraph to made operative in the Paris COP21 outcome document:

All Parties shall, in all climate change related actions, respect, protect, and fulfil human rights for all, including the rights of indigenous peoples, gender equality and the full and equal participation of women, food security and intergenerational equity as well as a just transition of the work force that creates decent work and quality jobs and upholds the integrity and resilience of natural ecosystems