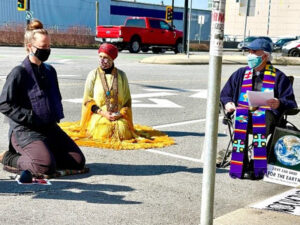 During this season of Lent 2021, there is lots of faith-full action happening!

KAIROS BC-Yukon and some subregional engagement in the newly formed BC Climate Action Network.

The petition addressed to ReconAfrica headquartered in Vancouver, B.C. was organized and signed by Green Anglicans (Anglican Church of Southern Africa Environmental Network) and KAIROS Canada partners. Copy of the Kavango Petition.

March 11: BC-Yukon KAIROS representatives joined in organizing and participating in GreenFaith day of action. Vancouver GreenFaith gathered to pray, meditate, sing, and ring bells in front of  Jonathan Wilkinson’s office (Federal Minister of Environment and Climate Change) to read out and present the list of demands.

March 19: Many communities joined in Forest March BC’s day of action. Susan Draper and Janet Gray have been leading the charge for KAIROS, sharing 5000 post cards they made for sending to our MLAs.

We are in a state of climate emergency. Take bold faith-full action. Please continue to support and pray for the land, old growth forest, and water defenders across our region. Thank you!