An act of care: reframing global efforts to contain COVID-19 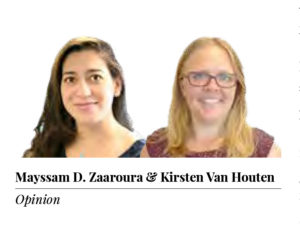 The narrative of war and rallying support for the battle of our lives and those of our fellow citizens excludes anyone who does not conform to a dominant masculine/feminine binary narrative.

We are waging war , we are told. We are all in this war together. We have to fight this disease—look at how this country is winning this battle, this is how we flatten that curve, and here is how we will emerge victorious.

This militarized narrative is used to describe the COVID-19 pandemic: fighting on the frontlines. The militarization is not only evident in the language describing the crisis; it also shapes the response.

Many governments, including in Canada, are adopting increasingly militarized language and approaches to enforce physical distancing and restrict mobility of populations around the world. In some parts of Canada, police have set up checkpoints to reduce non-essential trips between and within provinces. In more extreme cases, such as the Philippines, governments have given their militaries the authorization to shoot and kill anyone violating lockdowns.

These militarized responses have led to an increase of human rights abuses around the world. In the Philippines, 21 residents of the urban, poor neighbourhood Sitio San Roque were arrested after protesting inadequate access to food after their livelihoods were restricted by the lockdown in Luzon. The pandemic response has also led to a resurgence of armed violence, as tensions rise in fragile and conflict-affected states, including the Democratic Republic of the Congo.

Mobility restrictions imposed in some countries also pose a risk to human rights defenders seeking protection from violence perpetrated by state and non-state actors. In Colombia, the lockdown contributed to the assassination of a member of Organización Femenina Popular, one of several human rights defenders murdered within the broader context of state-sponsored and paramilitary violence.

This militarized response is driven by ongoing weapons manufacturing while other industries shut down. In Italy and other European countries, weapons manufacturing plants remain open as“essential services,” and while such operations have not been deemed essential in the United States, they have not been closed. Despite endorsing the UN’s call for a global ceasefire, such as inYemen and Syria, the government of Canada recently announced its decision to resume approving weapon exports to Saudi Arabia, one of the world’s most heinous human rights abusers.

The narrative of war and rallying support for the battle of our lives and those of our fellow citizens justifies this show of force. They are accompanied by violence and social norms that oppress all populations, but particularly racialized groups including Black and Indigenous communities; women and gender diverse people; and people with disabilities. This is the definition of militarized and toxic masculinity—whether adopted by men or women. It excludes anyone who does not conform to a dominant masculine/feminine binary narrative.

This narrative normalizes a military, police, or security presence that is proving to be far from benign.

For this moment of collective pain, force and muscle are out of place. Especially force and muscle that are using this pandemic to instil a tyranny of security that criminalizes those who are already most marginalized. In some spaces, it escalates the narrative of fear that leads to violence against those responding to the pandemic. Workers in too-often underfunded and underappreciated sectors of care. As Arundhati Roy asks: “if it were not masks and gloves that its frontline soldiers needed, but guns, smart bombs, bunker busters, submarines, fighter jets, and nuclear bombs, would there be a shortage?”

We need to reframe our narrative and response to the COVID-19 pandemic and, consequently, an alternative political and socio-economic response that takes into account the needs of the most vulnerable populations.

This reframing must be feminist: rights-based, inclusive, non-violent, and undertaken in the spirit of gender equality and racial justice. Amnesty International has noted that measures undertaken by governments in the name of protecting people from this disease must be “proportionate, time-bound, and that they are implemented with transparency and adequate oversight.”

Our response to COVID-19 must be presented as an act of care as opposed to an act of war. It must recognize that women are at the forefront of the response, and ensure they have seats at decision-making tables and where we maintain positions of leadership. A response that acknowledges women’s continued work as human rights defenders throughout the pandemic and beyond, ranging from challenging militarism to providing humanitarian assistance.

Rather than staying home to fight the virus, we stay home to care for ourselves and each other. The frontline can be reframed as our communities. Let’s use a narrative and response, steeped in care and compassion, in the hope that when the pandemic ends, this period might be remembered as the world’s greatest collective effort towards positive peace and a more equitable world.

Mayssam D. Zaaroura is a women’s rights knowledge specialist with Oxfam Canada, and Dr. Kirsten Van Houten is the global partnerships coordinator at KAIROS Canada. This piece was written in collaboration with members of the Women, Peace and Security Network–Canada.