A critical moment for upholding the human rights of Indigenous peoples 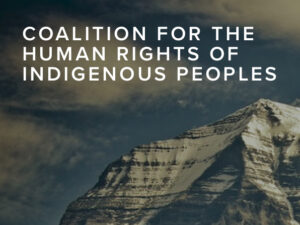 Our Nations and organizations welcome the significant progress that is being made toward adoption of federal legislation to implement the United Nations Declaration on the Rights of Indigenous Peoples.

A House of Commons committee has completed its review Bill C-15 and forwarded the Bill for third and final reading. Meanwhile, the Senate has begun a pre-study to expedite the Bill’s passage through that Chamber.

TAKE ACTION by asking your MP to support BILL C-15

Regional Chief of the BC Assembly of First Nations Terry Teegee said, “Implementation of the UN Declaration in Canada has been a long time coming. I want to acknowledge all the hard work that has gone into getting us this far. And I want to encourage all Members of Parliament and all Senators to make every effort to ensure that Bill C-15 is passed into law before this session of Parliament ends.”

Bill C-15 does not create new rights or alter existing rights. If adopted by Parliament, the Bill will establish an ongoing legal requirement for the federal government to work collaboratively with Indigenous peoples to implement the Declaration through law, policy and programs – and report publicly on the progress made.

Cheryl Casimer of the First Nations Summit executive in BC said, “Bill C-15 is a way to continue the work that Indigenous peoples began at the United Nations all those years ago. Passage of this Bill is the best way to ensure that Canada will now carry out the critical work of actually putting these standards into practice.”

In its recently concluded review of the Bill, the House of Commons Standing Committee on Indigenous and Northern Affairs adopted a number of clarifying amendments proposed by Indigenous peoples. These amendments enhance the Bill and do not alter the fundamental requirements of the Bill to collaboratively create a national action plan for implementation and to review and reform federal laws to bring them into line with the Declaration.

These same elements were also set out in Bill C-262, Romeo Saganash’s private Member’s bill. Bill C-262 was passed by the House of Commons in 2018 but a handful of Senators blocked the final vote in the Senate.

Councilwoman Laurie Buffalo of the Samson Cree Nation stated, “The UN Declaration is key to building a better relationship with Canada based on respect for inherent rights as well as the original spirit and intent of our Treaties as understood by our Nehiyawak Peoples. I call upon all MPs and all Senators to understand the importance of implementation of the UN Declaration by ensuring Bill C-15 is adopted into law on a non-partisan basis. Our survival, our dignity and true reconciliation as Indigenous Peoples, including our future generations deserve nothing less than to work Nation-to-Nation with Canada.”

Grand Chief Dr. Abel Bosum added, “The Grand Council of the Crees and the Cree Nation Government strongly supports the enactment of Bill C-15. We have worked for several decades to promote the development and now implementation of the UN Declaration. The human rights of Indigenous peoples must not be subjected to bias and politicization. Bill C-15 deserves the unequivocal support of all Parliamentarians.”

Canada Research Chair in Global Indigenous Rights Dr. Sheryl Lightfoot emphasized, “All governments have a fundamental obligation to implement the human rights standards set out in the UN Declaration. Bill C-15 is a world-leading example of how to fulfill this obligation in a principled, collaborative and pragmatic way. I want to urge Senators to seize this historic opportunity and bring C-15 to a final vote as soon as possible.”

The Coalition for the Human Rights of Indigenous Peoples (www.declarationcoaliton.ca)