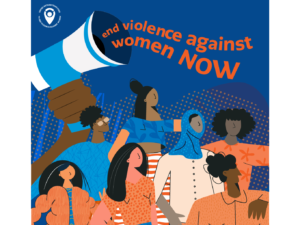 Beginning November 25 (International Day for the Elimination of Violence against Women) and lasting through December 10 (International Human Rights Day), KAIROS will join the international community and partners for the global 16 Days of Activism against Gender-Based Violence campaign. To complement local and national actions, we will highlight 16 Stories of Courage from our Canadian and international Women of Courage partners.  These stories will feature grassroots women’s organizations, women human rights defenders, land defenders, Indigenous leaders, peacebuilders and environmental activists and their experiences advocating for the elimination of all forms of gender-based violence against women and girls including the violence of militarized conflict and war, climate change, economic and social injustices, domestic violence and the violence of systemic inequities, racism and oppression.

The theme for this year’s campaign is: “Orange the world: End violence against women now!”. This year, the campaign is also spotlighting femicide and ending gender-based violence in the world of work.

For decades, women have underscored the connections between climate change, gendered impacts of resource extraction, conflict and violence against women. According to the United Nations, more than one in three women have experienced violence in their lifetime. During conflict and crisis, including the climate crisis, women and girls, already burdened by wide-ranging discrimination, experience appalling acts of gender-based violence. Throughout the world, the COVID-19 pandemic has compounded violence against women and girls, including sexual harassment, harmful practices such as child, early and forced marriage, and sexual exploitation.

Women’s organizations, networks and movements for peacebuilding, human rights, and ecological justice, continue to demand the incorporation of a gender perspective in responses to the climate crisis, economic injustice and militarized conflict. The involvement of all these groups in mobilizations against gender-based violence is critical,  especially in the current context of gender-based injustices and violence related to the environment and the COVID-19 pandemic.

Advocating for an end to all gender-based violence

During and after these 16 Days of Activism, walk with KAIROS, our networks and partners to demand accountability, structural changes and policies from governments, towards ending all forms gender-based violence. In the recently submitted Mandate Letters to the Canadian Prime Minister,  KAIROS makes several recommendations to the Canadian government related to Indigenous rights, corporate accountability, climate justice, international cooperation and women, peace and security – all of which are needed to end gender-based violence in its many forms.  The mandate letter emphasizes that the government must strengthen its feminist foreign policy by acknowledging and allocating adequate resources to the nexus between the Women, Peace and Security agenda, environmental and economic justice, including vaccine equity amid the COVID-19 pandemic. We encourage you to read the mandate letter and raise these specific recommendations with your Members of Parliament.

Receive timely updates and calls to action on KAIROS’ Gender Justice and Women of Courage advocacy initiatives. Sign up and select Gender Justice under I am interested in.