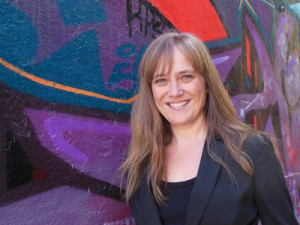 Jennifer Henry currently serves as the Executive Director of KAIROS: Canadian Ecumenical Justice Initiatives, a role she took on in 2012. She has worked in ecumenical social justice for 25 years, beginning in 1993 when she joined the Ecumenical Coalition for Economic Justice (ECEJ) as a popular education coordinator.

Her time with ECEJ included coordinating a cross-country economic literacy program called “Building a Moral Economy,” and contributing leadership to the Canadian Ecumenical Jubilee Initiative. Within KAIROS, she has served in many roles from network and campaigns coordinator to the manager of teams focused on education and animation, organizational development, and human rights (Indigenous rights, gender and migrant justice). As manager of the global partnerships program, she played a significant role in coordinating KAIROS’ grassroots response to the CIDA defunding.

Jennifer had the honour of being an ecumenical witness at six of the seven national events of the Truth and Reconciliation Commission.  She has given leadership to the Board of the Canadian Council for International Cooperation, and currently serves on the Primate’s Commission on the Doctrine of Discovery, Reconciliation and Justice, and the Board of the Centre and Library of the Bible and Social Justice.  She remains an activist and educator at heart.

Raised in on Treaty 1 territory in Winnipeg, Jennifer has a Bachelor of Arts and a Bachelor of Social Work from the University of Manitoba, and a Masters of Social Work and a Masters in Theological Studies from the University of Toronto. Her Master’s thesis was entitled Contrite Hearts in Solidarity Action: Elements in a Settler Ally Biblical Theology  She worships at the Church of the Holy Trinity, an Anglican Church in downtown Toronto, under the Dish with One Spoon Wampum Belt Covenant.