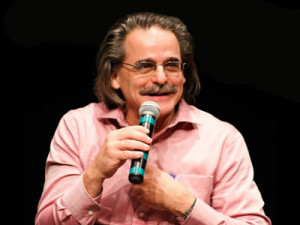 Prior to becoming KAIROS’ Program Manager in 2012, Ed coordinated KAIROS’ Indigenous Rights Program. This involved working with Indigenous peoples and their allies on domestic and international public education and action initiatives towards the recognition and enforcement of Indigenous peoples’ rights.

KAIROS’ creation in 2001 brought together 10 social justice ecumenical coalitions, including the Aboriginal Rights Coalition (ARC), which brought together churches, religious organizations, Indigenous peoples and regional groups. Ed was ARC’s National Coordinator from 1995 to 2001.

Ed has a Bachelor of Journalism (Television) from Carleton University in Ottawa and is the first student at York University in Toronto to complete a combined-Masters Degree in Fine Arts (Film) and Environmental Studies. While in Toronto, Ed co-founded Friends of the Lubicon, a support group for the Lubicon Lake Cree First Nation in Alberta.

Ed’s a hockey and soccer dad who lives in rinks and on pitches in Ottawa with his partner, Nancy, and their children, Graham, Gabriella and Robertson.